Milan, one of the largest urban areas in Europe, celebrated its turn to host Amma’s programs this year. The crowds in the previous program of Toulon were certainly large, but in Milan the crowds never stopped. 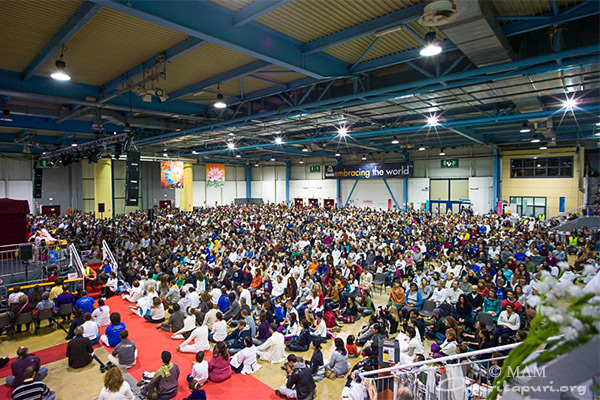 Every time Amma descended the staircase into the hall, there was a thundering applause and standing ovation from the audience at the Malpensa Fiere Exhibition Center. Every bit of the hall’s 30,000 square feet was full from the beginning of each program, and the crowd even overflowed and filled the adjacent hall of the same size.

Every morning, Amma came exactly at 10 am and didn’t get up from her chair until after 5 pm. The “evening” programs ran almost until dawn the next day. When Amma would leave the hall after each program, devotees were lined up for hundreds of meters along the corridor out of the hall, just waiting for another glimpse of her smile or a touch of her hand.

As Amma’s annual visit is a massive event for the region, the local media descended on the program hall en masse to cover the details. La Repubblica, the largest daily newspaper in Italy, ran an article entitled “30,000 in the queue for Amma – the embracing woman.” Articles also came in the national daily newspapers Il Giorno and Il Giornale, entitled “Embrace of Amma attracts a huge crowd” and “Cure for the world in crisis? The power of the embrace”. RAI (Radiotelevisione Italiana), Italy’s national public broadcast company and the second largest broadcaster in the country, featured the story of Amma’s visit in their evening news, which is received in 9 neighbouring European countries as well.

This year’s Milan program also provided various opportunities for the local devotees to express their love for Amma and to put her teachings into practice. From almost every province of Italy, there were cultural programs throughout the 3 days, including a Bharatnatyam dance, a sitar recital, and an ensemble of vocal and over 10 musical instruments all played by one man.

Walking around the entire venue, one could see all the volunteers working joyfully, singing bhajans as a group and sharing in the joy of selfless service to humanity. An exhibition related to Amma’s InDeed program was set up along the entrance corridor, including an elaborate bird house made of recycled cans and various artwork made from waste materials. The local children’s group (Amrita Bala Kendra) performed a very impressive piece on the importance of preserving nature, receiving a huge applause from the audience afterwards.

It was also quite a joy to see the group of nearly 100 devotees from Greece, who had come to invite Amma to their country. They enthralled the audience with their performance of Greek folk songs, and bhajans. At the beginning, they all held a huge banner, which read, “Amma – Please come to Hellas (Greece)!”

Like Toulon, the final evening program continued for over 15 hours until the last person received their hug from Amma. Amma’s boundless patience seemed like a live demonstration of the teaching she had given during her talk on the second night: “Those with patience achieve success in every field of life…. Love and patience are like two sides of the same coin. Patience is alertness, it is one-pointedness, it is awareness, it is devotion.” Through her patience and love, Amma had certainly succeeded once again in capturing the hearts of all those who came to see her this year.

As the caravan pulled out of the program site, the snow-capped mountains of the Southern Alps glistened magically in the morning sun rays. These majestic 15,000 ft peaks seemed reminiscent of Amma standing in her white sari, as though she was leaving them behind in her stead to watch over her Italian children until she returns again next year…