Like each year before it, the day of Krishna’s birth was celebrated in Amritapuri in a very festive atmosphere and music and bhajans were everywhere; it was a true celebration.

Early in the morning after crowds of people paraded through the ashram enthusiastically singing namavalis and Gopuja was performed. 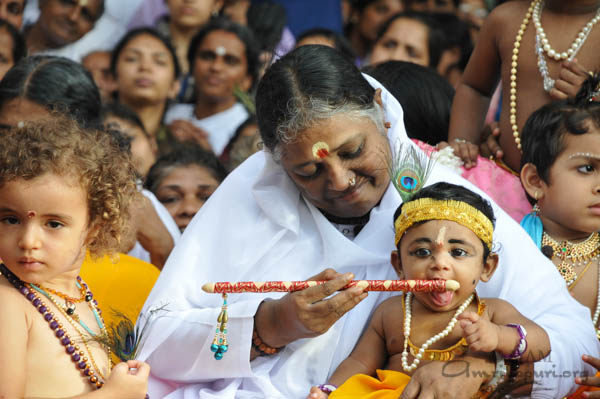 Amma came to the big hall and gave darshan to all those that had come for the festivities. Then once all the preparations were made and the procession had returned to the front of the ashram, Amma joined with everyone to participate in the Uriyadi games. Amma sat on the temple steps and sang bhajans as everyone crowded around to watch the young participants try their best to break the small clay pots suspended from high above. 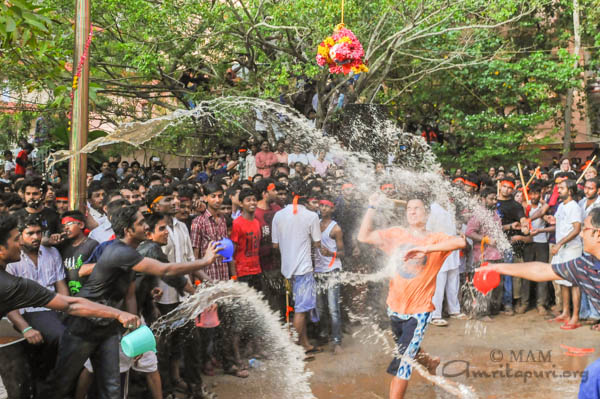 Right from Uriyadi everyone followed Amma back to the big hall for the evening bhajans which were highlighted by several beautiful Krishna bhajans. But the main event was still to come. After dinner, Amma came back to the stage for the grand finale. Amma gave her Sri Krishna Jayanthi message which was played on the big video screens.

“Sri Krishna Jayanti reminds one of the soul’s immortality.”

“The birthday of an ordinary person reminds us of the transience of human life, whereas that of a divine incarnation like Sri Krishna reminds us of the soul’s immortality” said Amma in her Krishna Jayanti message in Amritapuri.

“Lord Krishna’s life is a light illumining the way to the Supreme. God assumes a human form in order to teach how humankind may rise to the level of God. Like a mother who helps her toddling child walk, God accepts all the limitations of a human body for the sake of leading us. By assuming a human form, divine incarnations demonstrate how human beings ought to live” Amma said.

” Whereas the gopis, Arjuna, Udhava and Viduran became devotees of Krishna, Kamsa, Sishupala and Duryodhana rejected Him. Pointing to this, Amma said, “A mirror clearly reflects sunlight, whereas a piece of charcoal does not reflect sunlight at all. However, the sun does not discriminate between the mirror or charcoal piece, but shines equally on both.”

“Lord Krishna, who adorned himself with a peacock feather, continues to shine even today as the protector of Dharma and as the Guru of the world.
Through his life, Sri Krishna demonstrated the duties of a son, disciple, king, servant, teacher, friend and householder. It is this fullness and expansiveness that makes Krishna a purna-avatar, a complete manifestation of divinity in human form. Jagat Gurus (world gurus) are those who teach truth and dharma through their lives. Krishna expressed different bhavas to captivate different kinds of people. His teachings helped to uplift people of all levels, and they illumine the paths of knowledge, devotion, action and yoga. If we give up our ego and surrender to the Lord, He will protect us in all circumstances,” emphasized Amma. 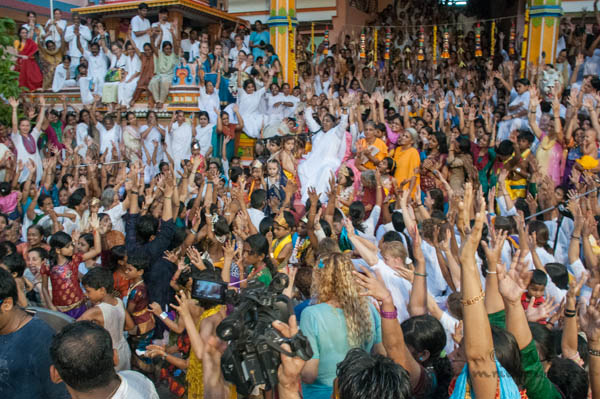 Then as the clock approached midnight chanting from the Srimad Bhagavatam filled the hall as a Bala Gopala Puja was being performed on stage. Right at midnight, the hour of Krishna’s birth, Amma began singing beautiful Krishna bhajans in a very celebratory and joyous mood, including: Agatanayi Vishnu Devan, Nanda Gopan and Katitayitaram. Then Amma asked everyone to stand up and forget all their worries and dance with arms raised as she continued to sing: Bhajo Re Bhajo, Manamohana Gopala and Bandha Krishna.
After the bhajans, by 1am Amma served sweet payasam as prasad to one and all.