Our World Our Vision Our Future 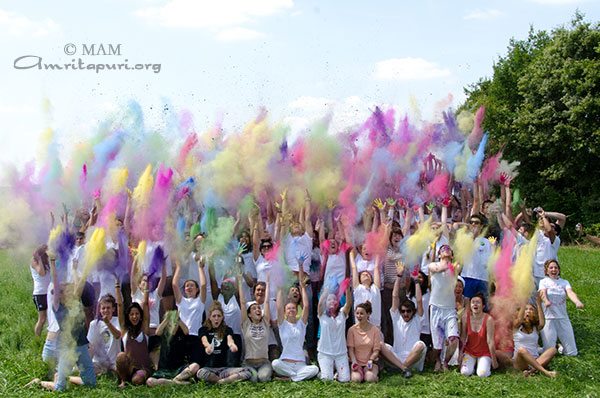 “Our World -Our Vision- Our Future” was the theme for this year’s camp. The participants were invited to reflect upon their ambitions and dreams. Interactive talks and workshops by renowned personalities from the fields of spirituality, politics, music, dance, theatre, and media inspired the youth to define their personal vision and take practical steps to reach their goals.

Kirty Matabadal, the current Youth Ambassador to the UN (Netherlands) addressed the conference. The feedback that she had collected from the AYUDH participants last year was included in her speech which she gave in front of the UN General Assembly in New York on 8th Oct 2012. This time she challenged participants to debate about the future of the planet in regards to food security: “Today there are 7 billion people on this planet. We produce food for 12 billion people, 1 billion is facing starvation and 1,5 billion are obese. Where do we go wrong?” The answers by the youth ranged from sustainable education for children, awareness campaigns to localized food production. These ideas will be presented at the conference ‘Eat2Feed’ with the Dutch Foreign Minister, organized on World Food Day 2013.

Jani Toivola, a Member of Parliament from Finland, shared his experiences of growing up as a person with African roots in a society that was almost exclusively fair-skinned. Jani told about the misunderstandings, discrimination and fear he faced as a child. Through self-acceptance and tolerance he gained the strength to overcome these obstacles and become a successful actor and later politician in Finland. As a member of parliament Jani today campaigns for minority and immigrant rights, youth employment and development aid.

Laura Schneider, an actress and singer from Germany reminded the youth that our vision of success should not only include our personal gain: “I reached my goal of being an actress….”  she said, “but what really matters is the intention behind your vision. If you’re intention is ‘me, me, me’ – I am not sure about that. But if you’re intention is for the benefits of all beings – miracles are going to happen. Doors are going to open. My life is a living proof that is possible.”

A completely different angle on following one’s vision was given by Aart Huijg (Netherlands), who cycled 34,000 kilometers from the North- to the South Pole: “I took the decision to take this 620 day long trip simply for one reason – because I knew that I could! I knew that anything was possible if only I believed in myself.” Aart faced many adverse situations, physical exhaustion and survived on just 5 Euro per day – enough to eat, but not enough to pay for a smartphone!

Br. Shubamrita Chaitanya encouraged the youth to become responsible leaders, practicing the three “R”s: Respect for Self, Respect for others and Responsibility for all our actions. Br. Shubamrita stressed the importance of Compassionate Leadership in the present times to bring about a change in the world. The best example for which is our beloved Amma. He said, “It is easy to keep discussing for days together about the present condition of the world and blame everybody for it. But Amma has a different approach. She does not just talk about it but tries to do something about it. She also tries to make everyone ask himself or herself, ‘What I am doing to make the situation better?’”

Bri. Dipamrita Chaitanya outlined how an optimistic vision of life can greatly enhance our level of happiness, contentment and health. Her talk was interspersed with interesting anecdotes and inspiring videos. 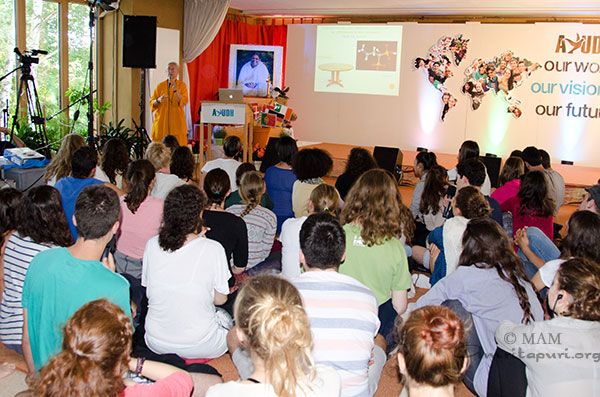 The photography workshop collected thousands of stunning photos. One workshop group built a labyrinth out of sand and stone in the garden of MA Center. The labyrinth, which was designed after the model of the ancient labyrinth of Chartres, France, has been used in many ancient cultures around the world as a tool for finding one’s personal vision and path in life.

An exclusive harp playing workshop was led by Christina Tourin, an internationally renowned harp player and pioneer in harp-therapy. The workshop participants gave a concert at the local old age home, sharing the gift of music with the elderly residents. Christina Tourin also gifted two harps to participants of her workshop, who will continue the visits of old-age homes in Portugal and Austria. 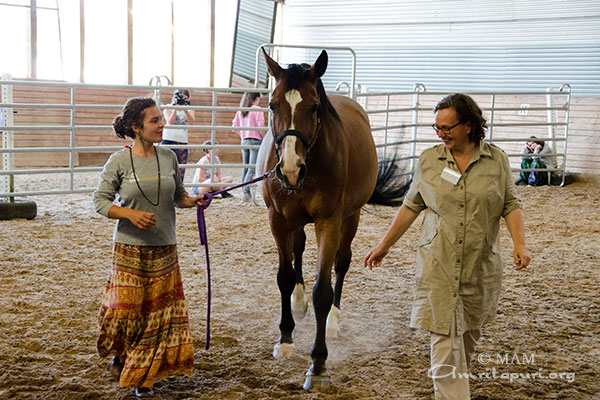 As every year, AYUDH also wants to make a contribution to the local surroundings. Therefore one workshop group built a barefoot path in the garden of the social care-center in Michelstadt. The bare-footpath is made up with natural materials and is open to people of all ages to train their sense of touch. Stephan Kelbert, the Mayor of Michelstadt, praised the youth’s contribution and hard work while inaugurating it on July 19th.

At least one youth from every nation participated in the In-Deed workshop, which trained them as coaches in sustainable development. Once the youth are back in their home countries they will visit schools and child-care centers to teach the children how to save water, grow their own organic food and protect biodiversity. Upon completing the school visits, participants will be awarded with the “Youth Pass”, a certificate by the European Commission for Education and Culture. “Youth Pass” certifies non-formal learning in the youth field and is acknowledged as part of the professional career of the youth throughout Europe.

Turning the vision within

Sessions of meditation, yoga, tai chi and bhajans, were held everyday and allowed the youth to turn their vision within and integrate the diverse impressions of the day. After dinner, the youth were invited to take part in interactive sessions led by Br. Shubamrita and Bri. Dipamrita to reflect upon their values, personal strengths and the impact they want to have in the world. The brilliant and very mature comments sparked a lively dialogue and ended the day in a reflective mode.

The youth undertook a huge group-art-project to literally “color the world with love.” The continents of the world were cut out in wooden pieces, which were then colored with the handprints of each and every participant. In the end, a unique mosaic of colors and shapes were created – a testimony of the youth’s willingness to work with their hands and hearts towards creating a beautiful and colorful world. 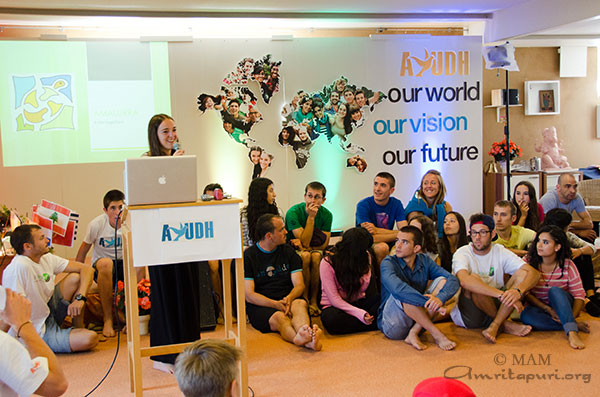 The grand conclusion of the week was a summer festival on the eve of Friday 19th July, during which each workshop presented the results of their group work. The diverse range of presentations gave an impressive demonstration of AYUDH’s talent and creativity.

After the show, everyone proceeded to the inauguration of the labyrinth at MA Center. Under the light of the rising moon the youth enjoyed an exclusive classical concert with harp, flute and soprano. In this mystical atmosphere 300 candles were lit, which were then carried by the youth to a nearby lake, where they were set afloat onto the water. During the procession the youth sang the prayer “Om Lokah Samastah Sukhino Bhavantu” – praying for all beings in creation to be peaceful and happy.