After many years, Amma was physicially present for Guru Purnima in Amritapuri. Even though she had just arrived the previous day from her two month-long world tour, Amma came to the stage at 10.30 am for the function. The celebrations began with Amma’s Pada Puja, which was performed by Swami Amritaswarupananda accompanied by the chanting of the Guru Gita and Vedic mantras. 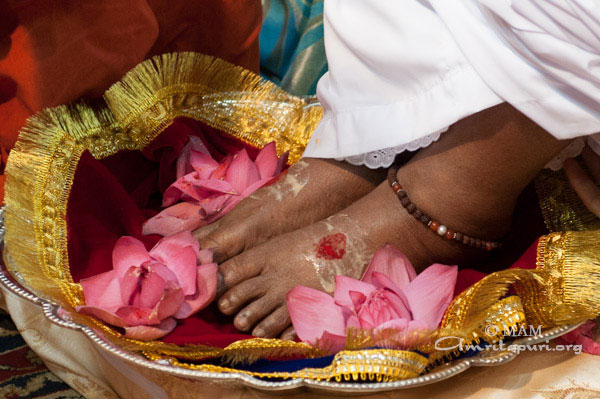 After the Pada Puja and chanting of Amma’s 108 names, all the Swamis offered a garland to Amma. Amma’s Guru Purnima message was then shown on the video screens.
In the message Amma said: “One may ask, “The scriptures say that God is within us and not different from our true nature. Then why should we seek refuge in a Satguru?” It is true that God is within us. We are, in truth, the embodiment of Sachidananda—pure existence, pure consciousness, pure bliss. But have we experienced this truth? No, it is being veiled by our ego. We hold the key to the massive treasure chest within us, but that key has become rusty due to a long period of lack of use. Just as we remove rust from a regularly key by applying grease, so too we have to remove the rust of our ahamkara and vasanas—our sense of “I” as a limited body and mind and our deep-rooted tendencies. This will help us realize our true nature. It is for this purpose that we seek refuge in a Satguru. 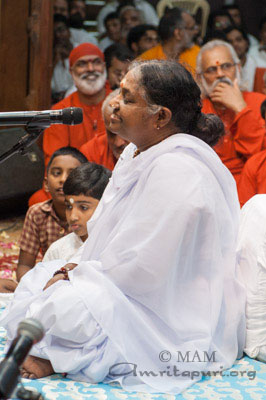 This physical body of ours is nothing but a bundle of meat wrapped up in skin. It has nine doors. And we think “This body alone is me.” Moreover, we continually nourish this misidentification. The ego wants to make us feel superior to others and wants others to show us respect.Everything is God’s creation—except the ego. That is our creation. We have to find a way out of this creation of ours. A wave or a bubble in the ocean is, in reality, not different or separate from the ocean. But what if the bubble clings to the idea that it is just a bubble, not the ocean?In a similar way, we need to remember: “I am not just this bubble of body, mind and ego. I am the ocean itself.” This remembrance can be achieved only through engaging in continuous spiritual practices.

When we bow down to a Satguru, we become free from the ego.The truth of our True Self gets revealed. We experience that we are not different from God. God is our true nature. Everything else can be attained by self-effort, but the only way to be freed from the ego is through humility and surrender. The seed and the tree are not different from each other. The whole tree is contained in the seed. But unless the seed goes under the soil and germinates, it will never become a tree. Similarly, when the spirit of surrender dawns in a disciple, freedom from the ego takes place naturally.

Once a guru knocked on a disciple’s door with a lamp in his hand. The disciple said, “Open the door and come in.” The guru said, “I cannot do that. This door can only be opened from within.” And so it is: the disciple has to open the doors of the heart to permit the entrance of the guru’s light.”

After the talk, Amma asked everyone to stand up and dance to the tune of Hari Narayana. As the song’s tempo continually sped up, people cheered and shouted Hari Bol!!! Hari Bol!!! 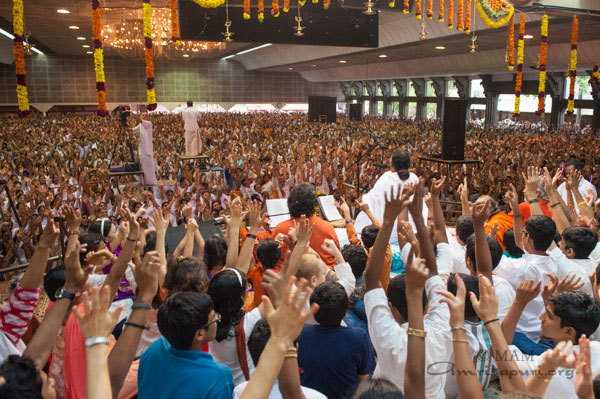 Amma then led everyone in a prayer for world peace. She asked every one to visualize flower petals of peace showering down all over the world, spreading light everywhere. Amma then led all in chanting Lokah Samastha Sukhino Bhavanthu.

Then Amma spent the rest of the day receiving all the thousands of people that had come to the ashram to see her after a two month absence. The darshan finally came to an end at 4:35am the following day.