29-30 May, Ernakulam, Kerala – Bharata Yatra – 2013
On the first day of the Brahmasthanam festival, Amma came to the stage at 10 am. She held a first session of bhajans, before some official ceremonies were conducted. 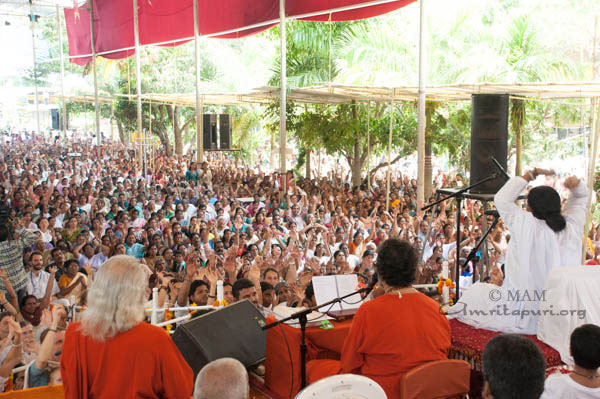 In his speech, Prof. K.V. Thomas said, “Amma is an embodiment of sacrifice and selfless service.” The minister lauded Amma’s humanitarian activities.

In his speech, K. Babu said, “Amma has conquered the world through Her unbounded love and compassion.”

After the ceremonies, Amma held another session of bhajans, concluding it with a satsang. After a guided meditation, prayers and arati, Amma started giving darshan to one and all.

On the next day, Amma ended her visit to Ernakulam by giving darshan till 5:45 am in the morning. At the end of darshan she stayed on the stage for some more time singing a lively bhajan to Devi with everyone in the crowd joining, clapping their hands, happy and fulfilled by Amma’s Love.