The New Year’s Eve programs in Amritapuri began cultural performances . The first was a traditional Indian dance, followed by a woman singing a French interpretation of Amma’s Tamil bhajan ‘Anbumiku chinthaikalal maalai thoduthen’ accompanied by a guitarist. There was another traditional Indian dance after which came a breathtaking fire dance. Children of Ayudh International closed the performances with a wonderfully choreographed dance. Children of all ages danced gracefully across the stage to the tune ‘We are the World.’

A number of colorful balloons were released in the hall. Shrieks of joy could be heard as children of all ages tossed the balloons into the air.

Amma lead everyone in chanting Lokah Samastha Sukinau Bhavantu, imagining flowers of peace showering down on children playing everywhere. Firecrackers could be heard in the distance as villagers rang in the New Year. 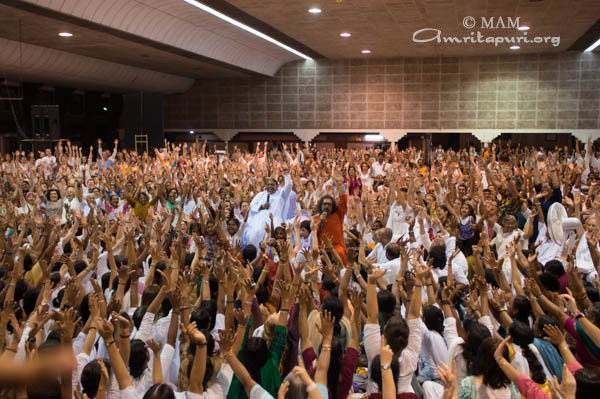 After chanting, Amma gave her New Year message and it was translated into English.
“Every experience is like a guru; it is said that life is like a maha-guru. First, life gives us many tests. We learn many lessons from these tests. We can draw inspiration from last year’s experiences. We can learn from our mistakes, correct them and move forward.”

“Today, the only reason children study is so that they can get a good job. They have no real desire to learn and grow as human beings. Children are repeatedly told study, study, study. Along with this, they also need to be instilled with values. If values are not instilled at a young age, this world will become populated exclusively by asuras; there will be neither human beings nor devas. Children today lack the role models that the previous generation had.”

“The birth of the New Year is an occasion for us to reflect upon the passage of time. It is at this moment that we become aware of the value of time. The truth is: Death has been incessantly following us since our birth. Before Death conquers us, there are some important things we need to complete. What is the reason for this journey of life? What is our goal? Are we moving along on the right path? Or have we lost our path? It is time for us to reflect and take some firm decisions.”

“The greatest journey begins with the smallest step. Let each one of us welcome the New Year by making small changes in our life. If we are all able to do that, then will be able to usher in a new age of love, compassion and selflessness. Let us surrender our prayers to the Paramatman, and as one mind, move together towards the same goal” Amma reminded all.

Following Amma’s Message, Amma had everyone play patty-cake to ‘Bandalo Bandalo’. Dao Dao Dao came next . Surrounded by children still clutching balloons, Amma then sang one of traditional Kerala tunes. The air was filled with ecstatic joy and bliss. But in addition to Amma clapping her hands and waiving them in the air, Amma held the microphone close to her mouth, and, cupping her hands, started to beat box. The minutes stretched into eternity as everyone was dancing and clapping along. Thousands of arms raised up in the air as Amma then shouted out ‘Mata Rani Ki…..Jai’ over and over again to end the evening’s celebrations.

After Amma left the hall, Prasad was passed out.

What a wonderful way to start the New Year! May each of our coming days be filled with such bliss and joy!