Two students, Nayana KR and Aishwarya CA , from Amrita Vidyalayam School, Davangere, are among 10 students who have been chosen to represent India at the International Science and Engineering Fair (Intel ISEF) to be held in May 2013, in Phoenix, Arizona, USA.

Nayana KR and Aishwarya CA won the IRIS 2012 Grand Award in the Senior Category for their project in which they presented Vaina’s Square Lemma: Extension of Pythagoras Theorem on Division of Equal Squares. 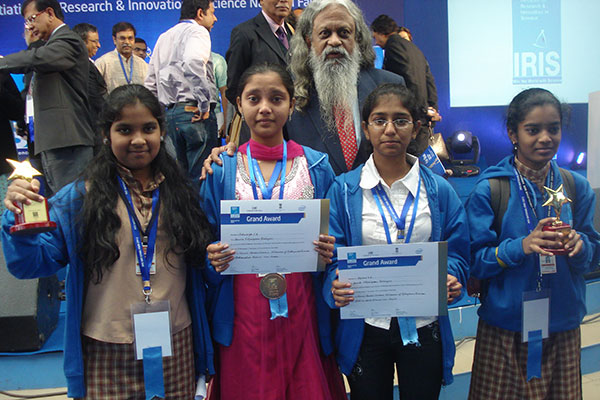 Their project was selected from 110 others which were presented at the Initiative for Research & Innovation in Science 2012 (IRIS), one of India’s largest science initiatives for students in classes 5-12. The event was held at Bal Bhawan, New Delhi on 29th Nov to Dec. 2nd, 2012.

Two other groups, also from Amirta Vidyalayam, Devangere, were recognized for their participation: Athreya Sharma & Bhagavathi Sharma in Medicine and Health Sciences: Crude Drugs as an Anti-Cancer Agent; and Ganga K M for her presentation in Engineering – Electrical and Mechanical: Automatic Level Crossing System & Automated Spot Lights at Railroad Junctions.

IRIS is sponsored by the Department of Science and Technology (DST), Confederation of Indian Industry (CII) and Intel. The initiative promotes and nurtures science and scientific research among young Indian innovators, recognizes and rewards outstanding projects, and provides opportunites to represent India at global science competitions.

ISEF is the world’s largest pre-college science fair competition where more than 1,600 young innovators from 65 contries come together to share ideas, showcase cutting-edge independent research, and compete for over USD 4 million in awards and scholarships.