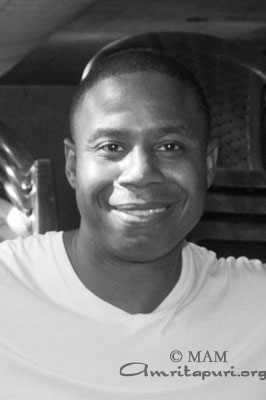 Doug E Fresh, one of the first stars of hip-hop, will perform during the 59th birthday celebrations of Sri Mata Amritanandamayi Devi on 26 September 2012 at Amritapuri.

Due to uncanny ability to imitate the sounds of percussion instruments, drum machines and turntables with his mouth, Doug E Fresh soon became known as ‘The Human Beatbox.’ He came on the hip-hop scene in the mid-1980s in New York City, performing with other hip-hop stars-in-the-making such as Slick Rick and Spoonie Gee.

A regular attendee of Amma’s New York programs, Doug E. Fresh performs regular at Amma’s programs in New York. Speaking with AmritaTV after his performance in 2009, he said, “[Amma] is such a fun person and a loving person.  … [From Amma] you’re just getting pure energy with no ulterior motive. [She] just wants to make the world a better place. … I think a lot of people need to feel her energy because it will make a difference in their life.”

Fresh considers his performances before Amma “a gift to Amma.” He says, “She is always giving to so many people, with no tiredness. Endlessly just giving, giving, giving. So, I felt somebody should give her something back.”