Amma’s commitment to taking care of Mother Nature, being good stewards of our Mother the Earth, is not restricted to India {ABC news}. People all over the world are responding–including Amma’s children in the Seattle. On the second night of the retreat there this year, members of the Pacific Northwest Litter Campaign, not yet a year old, arrived in the hall from two back doors–a procession of children and adults, led by Atlas–well, a devotee, anyhow–holding over his head a great globe: the earth that needs to be clean and litter-free. 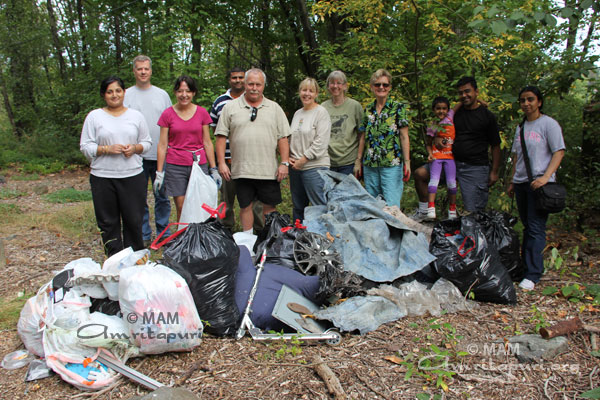 As they made their ways down the side aisles, the participants showed what it is they do: using sticks with grabbers on the end, they picked up (mostly imaginary) litter all along the route, and then ranged themselves across the stage where they sang three songs about caring for Mother earth.

One of the songs, composed by one of the satsang members, sounds like a good candidate for a work song for litter-picker-uppers all over the world. The tune is catchy, and the words say tell how to avoid making litter, and how to help when someone else has dropped it:

Plastic bags are floating in the steams
Picking them up is not as hard as it seems
Grab a friend and go for a walk
Picking up litter while you talk.

One target for litter collectors is cigarette butts. The group earned $2250.00 for the future Pacific Northwest Amma Center by picking up cigarette butts in several parks in the Seattle area in projects sponsored by the United Health Foundation and the King County Tobacco Prevention Program. Cigarette butts are poisonous (one cigarette butt filter, with or without tobacco remnants, smoked or not smoked, in one liter of water will kill 50% of the fish living in it) and take a very long time to biodegrade as they are made of cellulose (thus they present a threat to wildlife: cigarette filters have been found in the stomachs of fish, birds, whales and other marine creatures who mistake them for food).

The Pacific Northwest Litter Project started not quite a year ago with only 24 members. The group now comprises 258 participants, most from Washington, Oregon and British Columbia (Canada).