Ganesh Chaturthi was celebrated in Amritapuri with great devotion and enthusiasm. Lord Ganesha is the remover of all obstacles. In the morning, a procession of children headed to visit Lakshmi, the Ashram Elephant. Lakshmi was brought to the Main Temple. Hundreds of Ashramites and visitors sang bhajans while a special puja was performed. In the afternoon, a statue of Ganesha that had been at the Kalari for the past 10 days, was brought to the front of the Main Temple. 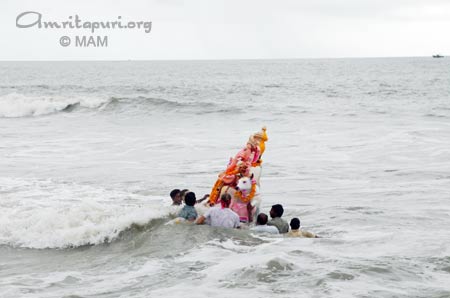 Another puja was performed. Music filled the air during the ceremonies. After the puja, a procession was formed to bring the statue to the ocean where it would be immersed. Villagers, children, ashramites, and visitors danced and sang bhajans praising Lord Ganesh. Beach Road became one long happy celebration. The statue of Ganesh was placed on a chariot for th procession.  Reaching the ocean, the statue is immersed in the sea. Ultimately all forms have to merge into the formless – All names and forms into the Consciousness – This is the message of Ganesh Chaturthi.