Christmas Eve was celebrated this past Saturday with Amma giving darshan on stage in the Main Hall throughout the day and well past midnight. Thousands of devotees from across India and around the world had come to Amritapuri on their holiday break to be with Amma during this special time of year.

In the middle of the main hall, a makeshift stage had been erected. In what has become an annual event, International guests and residents were going to perform a play. For the past month, they had been rehearsing practically every day for the chance to perform for Amma. Huge screens were set up so that everyone could see, with the words translated into Malayalam.

Just after 9pm, the Christmas play began, ‘A Revelation.’ The play followed the life of Mr. Joe Egoman, who had been spending his entire life in the full clutches of his self image and ego.  Eventually he was fortunate enough to meet Amma and try and turn his life around. 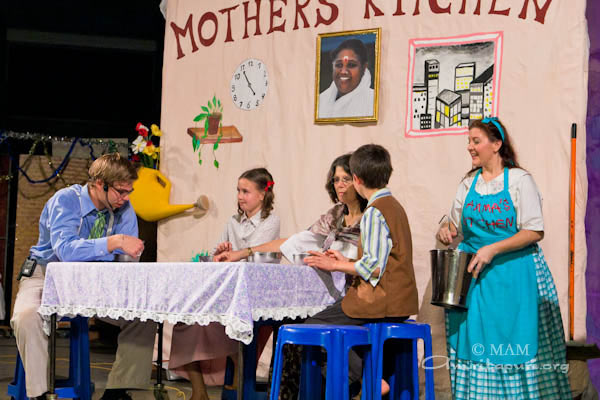 Shortly after midnight, Amma’s Christmas message was broadcasted on the large screen while Amma was giving darshan on the stage. Amma said, “There is one thing Amma feels it is important to emphasise:In the same way you celebrate the birthdays of these Mahatmas, with so much care and enthusiasm, you should demonstrate the same care and enthusiasm in putting into practice their teachings in each and every moment of your life. It is said that Christ resurrected three days after he was crucified. The body is comprised of the five elements. It can be cut, injured and destroyed by weapons. However, just like Sri Krishna says in the Bhagavad Gita: ‘The Atma or the self cannot be cut by weapons. Fire cannot burn it. Water cannot wet it. The wind cannot dry it. ”It was never born and never dies. It is eternal and indestructible. ‘” Christ’s body was crucified. but his had no effect upon the Atma. If we understand that ‘My nature is that of Atma’, then there is no death.

The message was translated in to English, French, Spanish, German, Italian, and Finnish.

Afterwards, trays of Christmas cake were brought up to Amma for her to bless. The cake prasad was then distributed to everyone.

Darshan ended around 3am Christmas morning.