Onam is one of the most festive days of the year in Kerala. Every day with Amma and especially Onam at Amritapuri suits the famous saying “Maveli nadu vaneedum kalam, manushyarellarum onnu pole” (Everyone was like one when Mahabali ruled the country). People from various places shared the one true source of happiness. Amma’s Onam is truly unique. 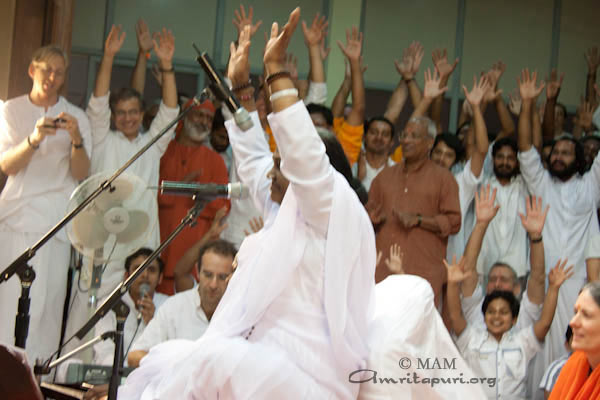 Morning archana saw thousands of new faces and Onam fervor set in a merrier mood. The hall was already full to capacity well before Amma’s arrival. People had come from various places. Most of them were wearing their best clothes. At 9:30am Amma was led to the hall by the musical Panchavadyam group of Paripally Orphanage. As part of the Onam Satsang, Amma spoke of the inner significance of the story of the legendary King Mahabali as well as faith and dedication in one’s Life. Amma recalled the Onam days of her childhood {news} and commented how modern day celebrations have lost a lot of their meaning and have become almost mechanical.

Amma’s message was translated by Swami Amritaswarupananda into English. To everyone’s delight, Amma asked everyone to stand up, forget themselves and all their tension and worries and dance, dedicating it to the Divine. She sang two bhajans, ‘Krishna Govinda Gopala’ and ‘Trimurti Gala’ and thousands of people joyfully danced with arms raised and clapped along to the beat of the songs. 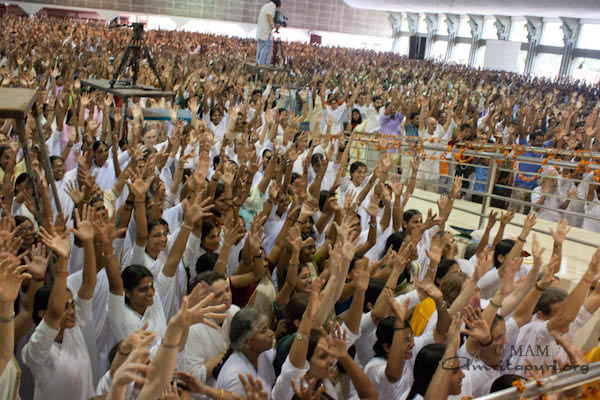 The specialty of Amritapuri Onam is ‘Onasadhya’ or Onam feast which Amma herself distributes as Prasad, while seeing and wishing each and every one who had come to share the occasion. While Amma gave a quick Darshan to the newcomers, bramhacharins and devotees had helped transport the big vessels of food on the stage. For the next several hours Amma distributed thousands of Onam meals, until each and every person had been served. Ashram elephants, Ram and Lakshmi share a special moment with Amma during Onam. As Amma walked down the stage, both Ram and Lakshmi welcomed Amma with their trumpeting cry rocking their heads as if prayers had been fulfilled. Amma playfully fed them sweetened rice. On Amma’s suggestion they even took some water up their trunks and playfully sprayed to the crowd immediately close to them.

In the evening Amma came for the regular evening bhajans. Amma sang beautiful yet soul-stirringly happy bhajans reminding the joy of Onam. Later at 10pm, Amma returned to the hall to participate in the cultural programs. A wide variety of programs were performed; students from Paripally and Amrita University performed traditional dances, AYUDH youth members and other devotes from all over the world performed original dances dedicated to Mother Nature set to English bhajans. Yet the best part of the night was at the very end, when Amma led the whole hall in spontaneously singing the bhajan Kali Maheswaryai. Kali Maheswariye has a subtle Vedantic comedy and as she sang, Amma gestured and acted out the meaning of each verse making it a memorably delightful Onam.

Amma’s very message was to make life itself an Onam, enjoying every moment through utmost faith and dedication. To the many present, the true Sadhya (feast) was being with Amma. Such was the Onam at Amritapuri this year too.