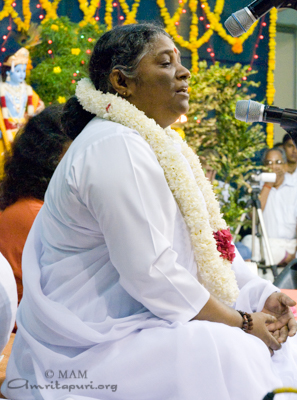 “Speaking about Sri Krishna is like introducing one to one’s self,” Amma told the thousands of people gathered in Amritapuri to celebrate Krishna Jayanti. The day had been filled with festivities—Go Puja1 in the morning, a procession of young gopis, gopas, Radhas and Krishnas in the afternoon, uriyadi2 until the sun went down, and then Bala Gopala Puja to the recitation of the Srimad Bhagavatam4 until the midnight hour.

Amma then spoke about the glory that was Sri Krishna. “Life is not mathematics, science, logic or philosophy,” Amma said. “It is a continuous flow of experience. We can transform our lives into an experience of spreading happiness to one and all. Sri Krishna’s life was the perfect example of this. If all our infinite, innate auspicious qualities were to take the form of a human being, the beautiful result would be Lord Krishna. He expressed the infinite power inherent in humankind to its fullness. It is for this reason that he is glorified as the Purnavatar—the complete incarnation of God. Sri Krishna was both ordinary and extraordinary at the same time. He was human and yet not human. He was complete in all ways.”

Amma concluded her talk by stressing the importance of innocent love and faith, saying that their birth in the heart of the gopis was in fact a greater miracle than Krishna’s lifting of Govardhana Hill.

“We need to transcend logic and firmly establish ourselves in innocent love and faith. We need to look at life through such eyes. Then all experiences will become blissful, like amrita [nectar]. That is the message of Lord Krishna’s life. … Sri Krishna’s words and actions demonstrated the different facets of life, the secrets of para-dharma and apara-dharma4 , and the subtleties of action, inaction and enlightened action. To understand Sri Krishna’s message, we need unwavering love, devotion and faith.” 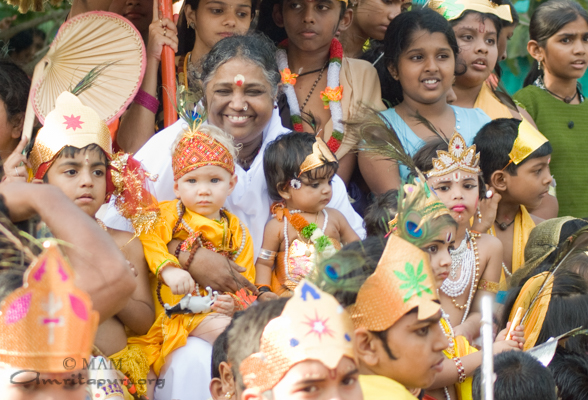 Amma then sung led everyone in a blissful dance to the tune of  “Narayana Narayana Gopala Hare.”

Despite the late hour—nearly 2:00 am—Amma distributed payasam [rice pudding] to all those present.