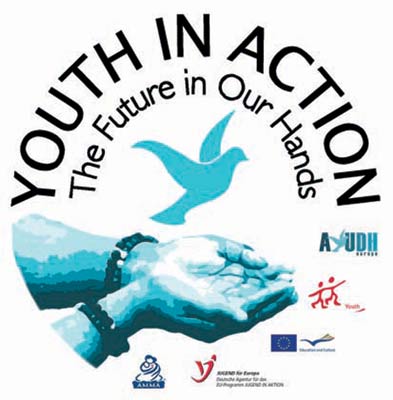 AYUDH Europe Youth Exchange 2008
The 4th annual European Youth Exchange held at the M.A. Center in Germany saw the arrival of a lot of young people from  all parts of European countries to participate in a 6 day program led by Br Shubamrita and Bri. Dipamrita. For the second time, the program was co-funded and accredited by the “Youth in Action” Program of the European Commission for Education and Culture.
The camp was composed of a variety of spiritual talks, workshops, bhajans and meditation, group activities and lectures on various issues relating to the youth. The daily programme started with Tai Chi, Yoga and Meditation classes followed by spiritual talks by either Br. Shubamrita or Bri. Dipamrita. The workshops promoting personal growth and self-development drew on various creative activities from Bhajans to Rap, Dance and Hip Hop, Acrobatics, Art-work, Tai-chi, Ayurveda and Personality Development. 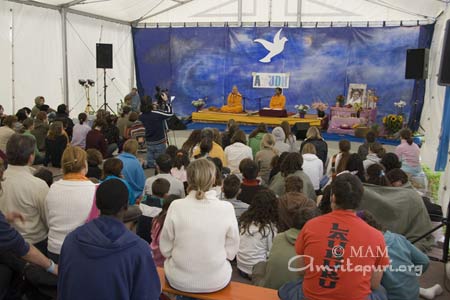 A Social Care workshop drew the interest of youth to promote care for the elderly by attending a care home and providing company and entertainment. The youth composed a song which was performed for those at the care home. Youth teamwork led to the construction of an eco-friendly building made from straw. Guest speakers gave inspiring talks on subjects such as Eco-villages, Fair Trade, and Leadership in Youth, helping to create ripples in young minds in the hope that these ideas would spark related projects in various countries across Europe.
The third day of the programme involved all the young people going on a nature trek. After walking in the heat of the sun the youth sat in a circle around a pond in the shade where everyone took part in a group prayer for World Peace. As the singing and chanting continued beautiful dragon flies were seen dancing around the surface of the circular pond. The trek continued till a forest clearing was reached where all the youth took part in group games followed by a picnic and a question & answer session under the trees. 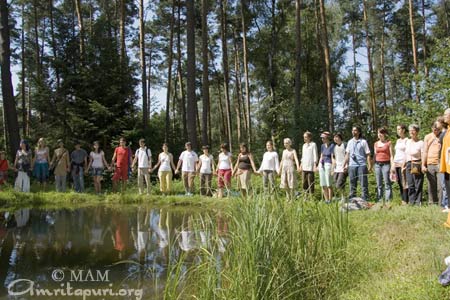 Daily evenings saw the presentations of what each country has been doing to promote AYUDH Europe and its values in their respective countries. The projects ranged from Green Friends activities to social care projects to waffle and cookie baking fundraisers and kirtan workshops. A number of countries had set up bhajan and meditation groups and there were a growing number of new projects in the making. The presentation helped to inspire especially youth form countries like Poland, Norway and Marocco, who participated in the youth exchange for the first time, to start with AYUDH projects back home.

The different groups produced songs and plays based on the theme of the Youth Exchange. The last evening was a festival of youth talents with a colourful display filled with fresh energy and bundle of enthusiasm of everything the youth had learnt during the week. The local Mayor, Mr. Kredel, attended the final closing ceremony of the Youth Exchange and was welcomed with a round of applauds and cheering by the youth. He was touched by the number of youth who had assembled in this quiet village to discuss important and serious topics such as climate change, and world peace. Seeing the sincerity and dedication of so many youth from different countries, religions and social backgrounds he remarked that “world peace has still a chance.” The Mayor concluded his contribution by presenting the Youth Pass Certificate by the EU ‘Youth in Action’ Programme to all the youth participants. 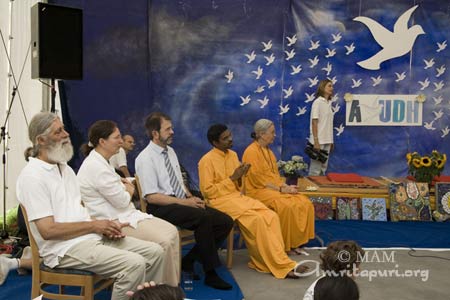 During one of the personal development sessions the youth had been invited to write their goals for the future on small paper doves, the symbol of AYUDH. Their pledges included to “reach my goal and become a doctor and help people in crisis all over the world” or “I will do my best to be an instrument of peace and compassion in all aspects of life, throughout my life.” Sticking the individual doves onto the backdrop of the stage, which was decorated with a huge white dove, a beautiful symbol for this youth retreat was created: that of a mother bird teaching her children how to fly high, how to reach their goals and spread peace to the world.

The Youth Exchange ended with everyone singing and dancing to what seemed like a never-ending and blissful version of Mata Rani before concluding with peace prayers.