The good news is, according to some estimations, we’ve already completed 5,107 years of Kali Yuga. The bad news is we have 426,893 more to go. 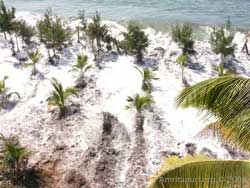 In the 12th chapter of the Srimad Bhagavatam*, Suka Maharishi gives King Parikshit a detailed account of what life will be like in the age “when only a quarter of the four feet of dharma remain.” What he describes is disturbing: a world steeped in darkness, where greed, lust, thievery, poor physical and mental health and spiritual ignorance reign supreme.

Furthermore, Sage Suka says that in the Kali Yuga the harmony between man and nature will be lost, resulting in mass destruction through natural disasters and extreme weather: “Already oppressed by famine and taxation, people will perish through drought, cold, storms, sunshine, rain, snowfall and mutual conflict.”

When one reads this, it’s hard to not think of the tsunami.

Recently when asked about the cause of the tsunami, Amma pointed to man’s exploitation of nature, the cause of which is two-fold—adharmic actions stemming from lack of faith in God and the world’s population problem.

“The Srimad Bhagavatam gives a clear picture of Kali Yuga,” Amma said. “In Kali Yuga, man will cut trees and build houses. Houses will become business centres. Temples will be exploited for material gains. All these have become true these days. By developing faith in God, the lost harmony can be regained. Faith in God indicates abiding in a dharmic way of life. Traffic rules help to maintain order on roads. Similarly, living a dharmic life will help us to bring harmony in our lives. These days, suppose a family is comprised of three people—all three of them will live like isolated islands. Sanatana Dharma says that we are all links on the same chain, but today everybody wants to grab as much as they can. Readiness to give is most needed.”

“Now there is no longer any rain when it is supposed to rain. If it does rain, there is either too little or too much, and it comes too early or too late. It is the same with sunshine. Nowadays humans are trying to exploit nature. This is why there are floods, draughts and earthquakes, and everything is being destroyed. There is a tremendous decline in the quality of life. Many people have lost faith. They do not feel any love and compassion, and the spirit of working together, hand in hand, for the good of all, has been lost. This will have a bad effect on nature. Nature will withdraw all her blessings and turn against man. Unimaginable will be nature’s reaction if man continues like this.”

“We are taking three times more than what we need from Nature,” Amma said. “We cut trees, dig bore wells, build dams against free-flowing water, cut stones from the mountains—thus goes on the list of exploitation.”

This was the third time in the past year that Amma had spoken to the ashramites about the growing disharmony between man and Mother Nature—each time focusing on the population problem:

“Controlling the population explosion is the best way to control the exploitation of nature,” Amma said. “It is enough to have just one child. In case a couple needs more, they can adopt an orphan.”

Amma said that the world’s birth-rate is continually increasing and its death-rate decreasing. She has specifically mentioned India and Bangladesh as being places where this problem is particularly out of hand. “If things continue the way they are, in 30 years India will have the No.1 population problem,” Amma said.

“Population has increased by hundreds of millions, but the size of the earth has not increased,” Amma said. “Because of this, man has started exploiting the eco-system. Trees that purify the atmosphere are mercilessly cut down and factories are built in order to cater to our ever-increasing needs.”

Amma said we must control the population and make others aware about the problem. “It is best if couples have just one child,” Amma said. “We should create this awareness in India. This will save us from poverty, hunger and the loss of our culture.”

“Some religions are against controlling the population,” Amma said. “This may be in some religious texts, but if so then the texts need to be changed.”

Amma admitted that limiting the number of children they have could be difficult for some couples because of the strength of their vasanas [tendencies]. “But it can be done,” She said, citing for example the sacrifice some Indian families make when the husband temporarily relocates to a Gulf country in order to make more money. “For everything, we need control,” Amma said. The implication was clear: we are willing to sacrifice for the sake of our immediate family; we need to become more expansive and become willing to make such sacrifices for the sake of this one-world family.

Reading the Bhagavatam, one realizes the horror of Kali Yuga is not a thing of the future. True, things can get even worse, but we are already very much in the Age of Kali. Almost all of Sage Suka’s predictions have already come true.

Since the tsunami, many TV reporters and newspaper journalists have asked Amma about its cause and how to prevent such tragedies from repeating. Amma has been telling them that we must stop our exploitation: “Go back to your dharma. When we lose our dharma, nature also loses its dharma. The harmony is lost.”

With regard to population problem, Amma said, “On one side, we are free to create as many children as we want. But on the other side, nature can destroy all of them in one fell swoop.”

*Srimad Bhagavatam is a text written at least 5,000 years ago by Sage Veda Vyasa. It details the incarnations of Lord Vishnu and details many aspects of the modern world.