The temporary shelters built by the Ashram are now finished and have running water and electricity provided through an Ashram generator. These shelters are 2 kilometers away from the Ashram, on the land owned by the ashram. 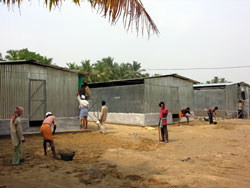 The shelters have 15 toilets and 15 bathrooms.

With the help of devotee-volunteers and brahmacharis who worked around the clock, the shelters were completed within four days

The Ashram is waiting on government approval to allow the people staying at the mainland relief camps to shift to the shelters.

Ashram lends five acres of land to the government so that they too can build temporary shelters for those rendered homeless.