Walking down Beach Road must be much like it is to walk down some scenic path in Sarajevo or Baghdad. On one side, nature glistens with its eternal promise of renewal. On the other, the houses look like they’ve taken mortar fire. It’s a road of ghosts, of disappointed dreams, of women sitting on stoops holding their heads in their hands and men half-heartedly burning rubbish in their front yards. It’s a road in need of an exorcist. 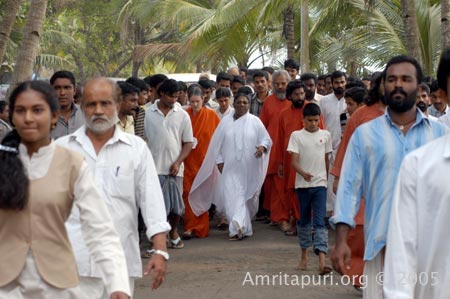 Monday, Amma walked down this three-kilometre stretch on Her way to Azhikkal Beach. Sixteen days had passed since the tsunami had come; in the Hindu tradition, the 16th day marks the end of mourning. Amma was going—along with 5,000 ashramites and devotees—to the spot where 42 people had been cremated on 28 December. She was going in order to pray for the peace of the souls of the dead and for those they’d left behind. 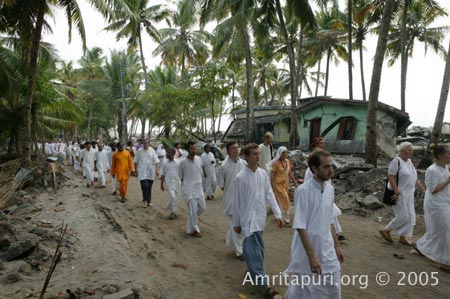 As the procession moved forward, the participants chanted aloud what has become the Ashram’s moola-mantra: Om lokah samastah sukhino bhavantu ” may all the beings in all the worlds be happy.”  And as they walked, it was plain that this was not mere lip service, for amidst the devastation, the procession passed by some 10 Ashram-run food-distribution counters, several other places where people could seek free help from Ashram doctors and also the road leading to the temporary shelters the Ashram has constructed for 500 people.The procession also overtook brahmacharinis who’d been out helping the villagers clean their homes and offering support to those who’d lost loved ones. Indeed, Beach Road has verily become Amma’s mantra sprung to life. 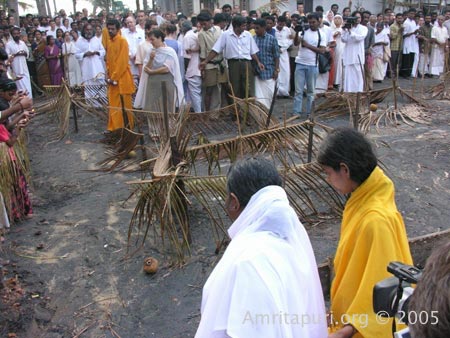 When Amma reached Azhikkal Beach, the places where the 42 funeral pyres had burned were still marked. They had been sectioned off so no one would trespass upon them. Amma asked everyone to light small clay oil lamps and then, holding the lamps in their hands, to stand in a formation that spelled out the peace mantra in Malayalam. 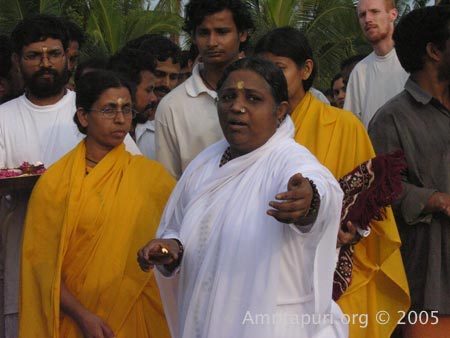 “We may claim that we are the ones who are doing everything, but before we could even blink our eyes, the waves came and destroyed everything. We now understand the limitations of our efforts, and that science too has limitations. It is grace that helps to make everything complete. Our only protection is in surrendering to God.

“One thing we can do in this situation is to invoke love and compassion in our hearts. Pray with your hearts. Act with your hands.

The dead are gone. To bring them back is impossible. Let us use this situation as an opportunity to share peace and love with the living.

“The dead are gone. To bring them back is impossible. Let us use this situation as an opportunity to share peace and love with the living. Become an embodiment of peace and service—both internally and externally. Pray and put forth the effort—take a vow. Pray ‘lokah samastah sukhino bhavantu.'”

Amma then sat down in the sand, and everyone chanted the ancient mantra for several minutes. When it finished, Amma’s cheeks were stained with tears.

To finish the ceremony, everyone walked, with lit lamps in hand, in a circle around the cremation grounds, and then, led by Amma, they offered their lamps into the Arabian Sea. One villager even immersed himself fully in the water, holding his lit lamp over his head like someone saving something precious. A few people even managed to get their clay lamps to float. 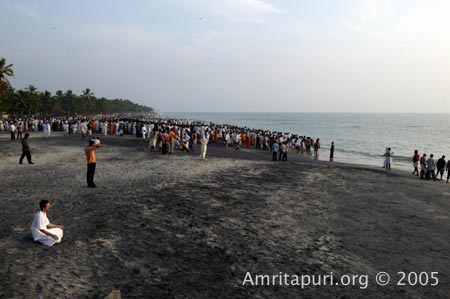 Sixteen days have passed since the tsunami hit, and the mourning is officially over. But as Amma says, it is not so much the dead that need our prayers as do the living they have left behind. And the living needs more than 16 days. In all reality, their homes will be whole again much sooner than their hearts. It’s going to take them years to pick up the pieces. But Amma has made it clear: She is here for them now and will be till the end. 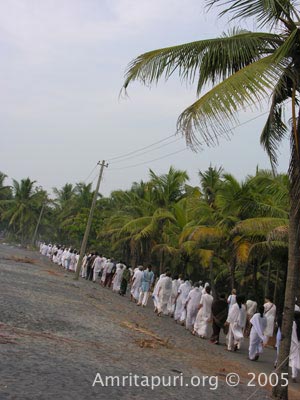 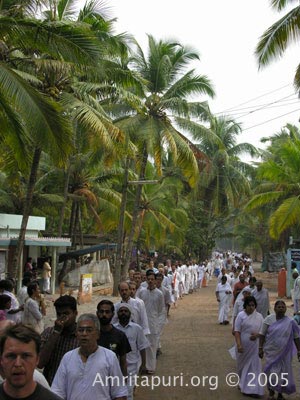 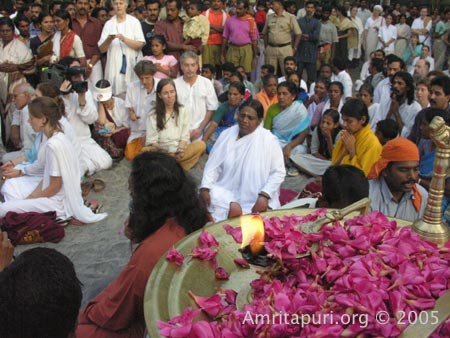 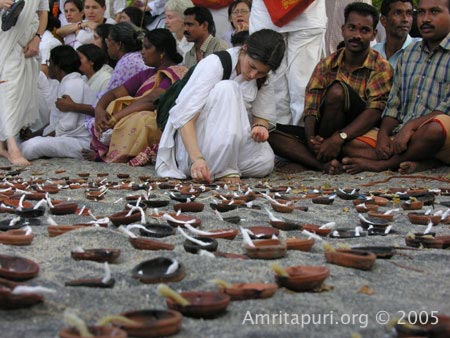 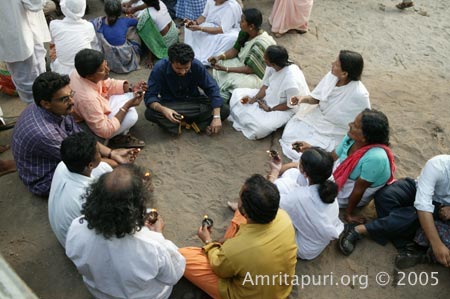 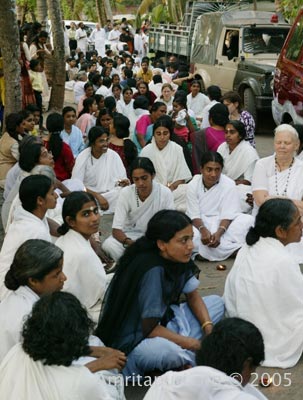 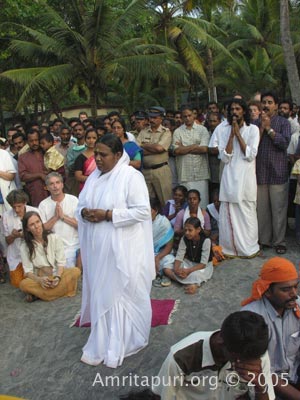 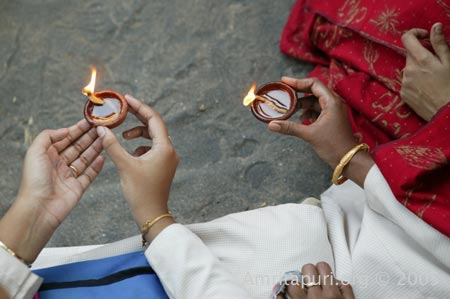 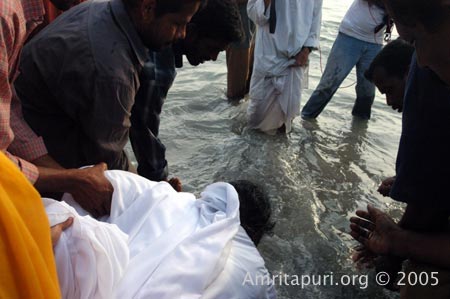 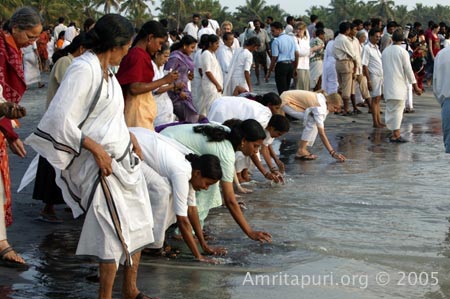 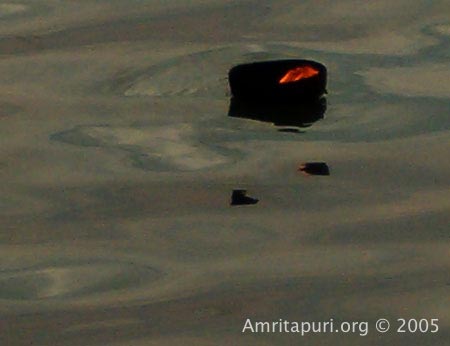