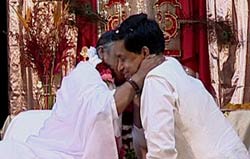 Amma was welcomed to New York by Ramu Damodaran, chief of the Civil Society Service of the United Nations Department of Public Information, and Anika Rahman, the President of Americans for the United Nations Fund for Population Activities (UNFPA).

After garlanding Amma, both dignitaries addressed the capacity crowd that had gathered at the Manhattan Center for Amma’s satsang, bhajans and darshan.

Civil Society Chief Ramu Damodaran, a Keralite by birth, referred to his opportunity to speak as a “homecoming.” “Every time I go home to India, the first thing I do is to go to a little room in our house which my mother has converted into a prayer room,” he said. “And the first thing I see when I go into the prayer room is a picture of Amma. So, today, in a sense, for me is a homecoming, except it is not a picture I see, but the person herself—and I am grateful.”

Damodaran went on to say that how he has always admired the work of Amma and the Mata Amritanandamayi Math, comparing the Math’s peace-promoting human-rights work with that of the United Nations itself.

“We at the Untied Nations are extraordinary fond of acronyms,” Damodaran mused. “We like putting words together, taking their initials—UNFPA, UNICEF, UNESCO… And I wonder, if at some time we have chosen ‘AMMA’ as an acronym what it would have stood for. And I think what it could very well have stood for is: ‘The Awareness of the Magic of My Action—A.M.M.A.’”

“None of us fully realize the magic of which each of us is capable,” Damodaran said. “The work of the Math is testimony to that.”

Anika Rahman praised Amma not only as a spiritual leader and humanitarian, but specifically as an advocate for women’s rights. “I am inspired by [Amma’s] beliefs, by the very embodiment of giving that she stands for,” she said. “I love her for the breath of her passion—from widely publicized giving to tsunami victims to humble families who do not have the money to pay for their daughter’s wedding. I am so amazed that such a woman can touch so many people here in New York.”