Hoping to get the reconstruction plan the Ashram has submitted to the government authorised, Amma held a meeting with Sri. Oommen Chandy, the Chief Minister of Kerala, today at Amritapuri. 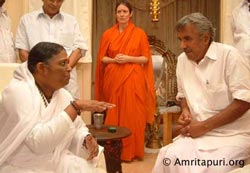 Amma conveyed to the chief minister the necessity of moving forward quickly with the reconstruction, explaining to him how traumatised the villagers are. “They are still not sleeping well at night. If there is even a small power surge and the ceiling fan picks up speed, they awake with a start, thinking it is another wave,” Amma said.

Amma also went into the details of the Ashram’s plan, which includes a seven-foot foundation—two above ground and five below.
She expressed Her deep concern for the feelings of the people, and her wish to see their homes rebuilt right away.

Swami Amritaswarupananda spoke with the media after the meeting. “The Ashram has been ready to start the reconstruction of the destroyed houses, we have just been waiting for the approval of the plan by the Government of Kerala.”

“At present we have constructed nine temporary shelters, and 250 families are being accommodated there. In Alappad Panchayat, there are a total of 9,902 displaced. Of them, 6,000 are in Ashram-run relief camps. The government has not yet finished the temporary shelters it has undertaken to build. If the government had responded to the Ashram’s overture earlier, we would have 100 homes built by this time.

“In Tamil Nadu, the government is fully cooperating, and we already started the construction of 2,500 houses there, and we have adopted 350 children who lost their parents in the tsunami. We have also fully adopted two villages in Nagapattinam. In Andaman and Nicobar Islands, we have adopted three villages, as well.

On Tuesday, Amma will be flying to Sri Lanka in order to uplift and console the tsunami victims there.