Ashram doctors have been making regular rounds of tsunami relief camps since the day after the disaster. Their immediate assessment was that the villager’s greatest problems were psychological—chiefly, anxiety and depression. 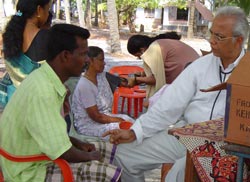 Anxiety and depression can be symptoms of posttraumatic stress disorder. PTSD is a debilitating condition that can follow any terrifying event. Often people with PTSD suffer from flashbacks, nightmares, a general feeling of fear, agitation and emotional numbness. They also tend to avoid stimuli that remind them of their traumatic experience. PTSD can lead to alcohol and drug abuse, chronic anxiety, depression, low self-esteem, guilt, panic attacks, and, in general, it can make functioning properly in society difficult.

In order provide free assistance to tsunami victims suffering from PTSD—as well as other psychological, physical, social and financial problems—AIMS, the Ashram’s super-specialty hospital in Cochin, has formed a team comprising psychiatrists, medical doctors and social workers to undertake what is being called the Amrita Tsunami Rehab Project.

Since the project began on 6 January, the team has been making regular rounds of the relief camps in area surrounding the Ashram and speaking with the tsunami victims.

“The first phase is simply helping them to drive out their inner sorrows,” says Dr. Siju, an AIMS psychiatrist participating in the project. “It’s important to get them to pour out their grief.”

According to Dr. Siju, most people emotionally transcend the bulk of their losses within the first six months. During this period of acute grief, it is impossible to make any diagnoses. However, through the next half a year, the doctors and social workers will be speaking with the villagers, helping them to open up and shed their pain, as well as finding out all the other areas in which they are having problems.

Assessment is the second phase. After six months, who are the people still locked in their despair? Who is still startled by loud noises, suffering from recurrent nightmares, etc? Once the people are assessed, a plan of treatment can be laid out—both pharmacological and non-pharmacological.

As for villagers who had been diagnosed with psychological problems prior to the tsunami, the team will immediately help them in continuing their treatment.

Psychological maladies are not the only problems with which the Amrita Tsunami Rehab Project is helping the villagers. Its focus is wide-ranging, and the team will be assisting with all types of problems—psychological, physical, social and financial.

“When anyone is under a great amount of stress, its easier for them to contract diseases,” says Dr. Jagatlal, a biochemist participating in the project. “So we will be there to monitor and treat that. We will also help the villagers to communicate with government officials regarding any problems they may be having—helping people adjust to the lack of privacy they are experiencing in the shelters. Another big problem in the villages is alcohol abuse, so we will be helping them with that as well.”

With a tragedy of this magnitude, there are so many areas that typically fall through the cracks. For example, in the past week the team has spoken with four couples that have lost all their children and are now in a most unusual situation: after having their last child, the wives had all undergone reproductive sterilization surgeries. The team is going to assist these women in having their procedures reversed at AIMS so that they once again can have children.

According to the doctors, each segment of society is suffering from problems specific to itself.

Many elderly are now feeling neglected, as their children are paying less attention to them, focusing primarily on their own children. Some old people have lost their caretakers altogether. And those who are prone to hypertension are having problems due to general stress. It also is common for them to suffer from obsessive worrying.

“More than anyone, it seems to be the mothers who are suffering the most,” says Dr. Siju. “Being fishermen, the men are strong and used to dealing with the sea, but the mothers are very much shaken.”

Although some children are showing signs of emotional problems, for the most part they are faring the best, say the doctors. “Being in the relief camps has actually been good for them,” says Dr. Siju. “They are playing all the time, so they are very happy. The camps have really helped them.”

With the opening of the Ashram’s temporary shelters on 13 January, many of the villagers are finally moving back to the Alappad peninsula. Dr. Siju says that this actually will be very beneficial for them psychologically, as it will help them desensitise to being near the ocean.

This most important aspect of the Amrita Tsunami Rehab Project is that it is amrita undying. The doctors and social workers are not going anywhere any time soon. They will take their time and handle each situation with the time and attention it needs. They will be here every day, helping the villagers get through this difficult time.