With the entire coastal area around the Ashram evacuated, more than 10,000 people need to be fed three times a day. And this is only taking into consideration the people now housed in relief camps on the mainland. There are even more who have not left the peninsula, but are now without any food supplies, stoves or fuel. 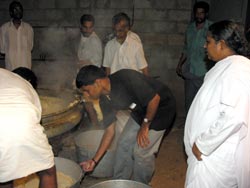 Thus from the minute Amma had the Ashram set up its relief camps, the cooking began. The food is regularly being transported to the 12 centres in the area, as well as to the villagers remaining on the peninsula. Amma herself has visited the kitchen to make sure everything is going according to plan.

As the Ashram is used to feeding as many as 20,000 people a day, the ashramites have not had trouble preparing the food. They’ve mainly been cooking rice, uppumav and simple but nutritious curries. They are also bringing fresh water to the people, as many of the wells have become contaminated by salt water or waste.

“The serving is going on literally 24 hours a day,” says the brahmachari in charge of the kitchen. We are using 1,000 kg of uppumav every day, 1,700 to 2,000 kg of rice and have just received four lorries full of vegetables. We also are giving away about 1,500 litres of milk every day.” 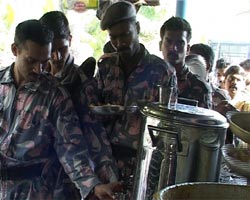 There are approximately 150 ashramites and devotees helping with food preparation, cooking and food serving. It never stops. The canteen is constantly full of brahmacharinis and householder devotees—including many from the West—chopping up vegetables for use in curries.
In the picture on the right, commandos are taking lunch served by the Ashram.

Werner, a 67-year-old devotee from Germany, has been working almost non-stop since the disaster struck. “Mostly I have been helping move the heavy kitchen items. My only prayer to Amma is: ‘Please give me strength to be useful for this planet.’ It is fulfilment for me. I am only sad that I am on old man now and cannot be as useful as I would be if I had a younger body.”