It’s a horrible thing to picture. When the tsunami waves pounded the fishing villages near Chennai, hundreds of wooden boats moored on the shore were sent flying. They struck people, destroyed houses and smashed into cars. Some came down, riding waves as tall as 40 feet. 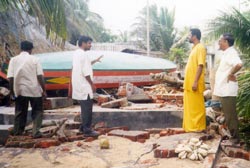 “The people are simply shell-shocked,” says one of Amma’s senior brahmacharis who has been helping with relief work in Tamil Nadu. “They didn’t know what to do. Believing that their children were doomed to drown, they even put them in the boats, so at least they would have a chance. Miraculously, some such children were found three km away with only bruises.”

Upon learning of the tsunami, Br. Vinayamrita Chaitanya, the head of Amma’s Chennai Ashram, immediately started relief efforts. He arranged for food to be cooked at the Ashram and then drove 50 to 60 kilometres along East Coast Road, distributing it to the needy. The next day Amma sent him to Nagapattinam District.

“When we reached there, we saw bodies strewn everywhere,” he says. “My first instinct was to help remove them, but then I decided the living, who were without food, needed our help more. So we started the cooking.”

Since the disaster, the Ashram has focused its relief work in three fishing villages: Kovalam, Pudhukuppam, Nemeli and Mahabalipuram. All the huts, fishing nets, catamarans and other boats in these three villages were destroyed. Their losses total into crores [one crore is $233,644 U.S.D.].

“One 60 year-old-lady who came for treatment of bruises on her face told an amazing story. When the waves came, she wrapped her arms around a palm tree. The waves were beating her so badly that it took everything she had to hold on, but she knew if she let go she simply would die.”

In Tamil Nadu, the Ashram has sent medical teams comprising four ambulances, seven doctors, five paramedics and a full ICU team. These have been making regular rounds in ambulances since the disaster. They are accompanied by vehicles distributing pongal [rice and dhal curry] and other food. The Chennai Ashram is feeding 10,000 daily, as well as giving away clothes, soaps, oils, toothbrushes and other necessities. In the first few days after the disaster, the doctors had already distributed more than Rs. 200,000 in medicines .

“The devotees have really been there for the victims,” says Br. Vinayamritai. “One immediately donated 58,000 packets of biscuits for distribution. Others came to the ashram and simply asked what they could do. We told them to obtain blankets, utensils and sacks of rice. They just went out and purchased what was needed.

“The members of Chennai AYUDH [the Ashram’s youth group] have also been helping. Those first days, they were so busy that many of them went without food. Some even took leave from work to help with the Ashram’s efforts. It is their love for Amma that makes them so selfless.”