You are here: Home / terrorism 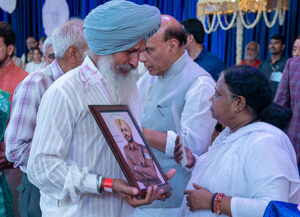 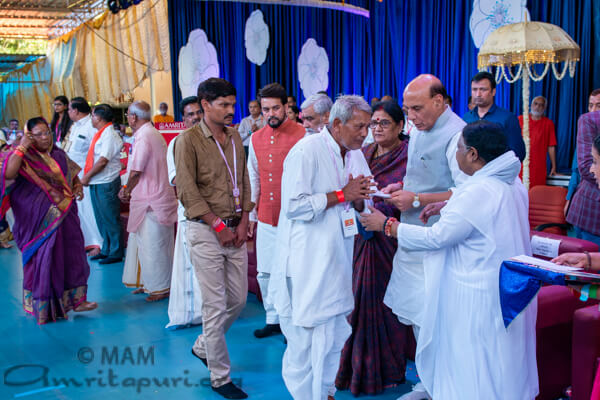 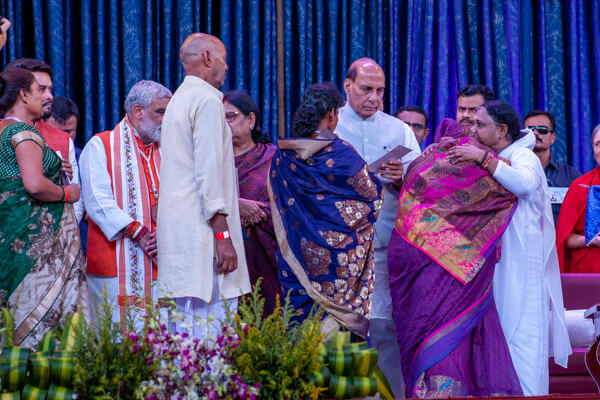 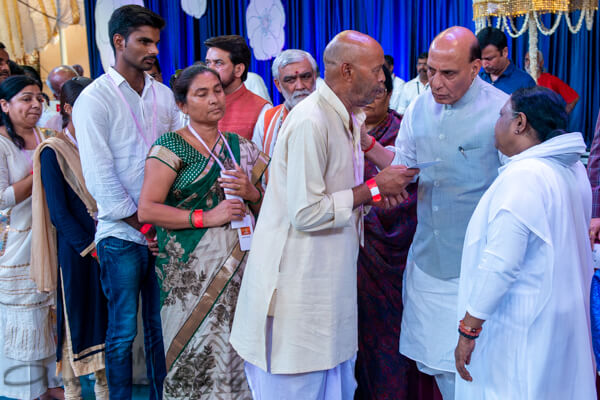 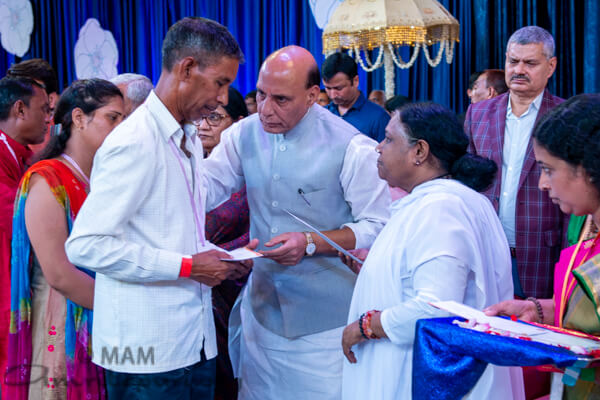 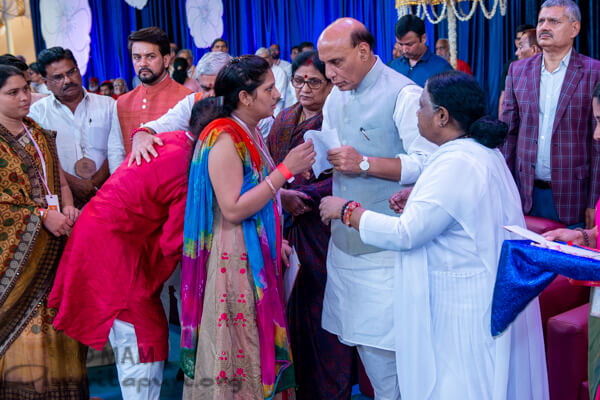 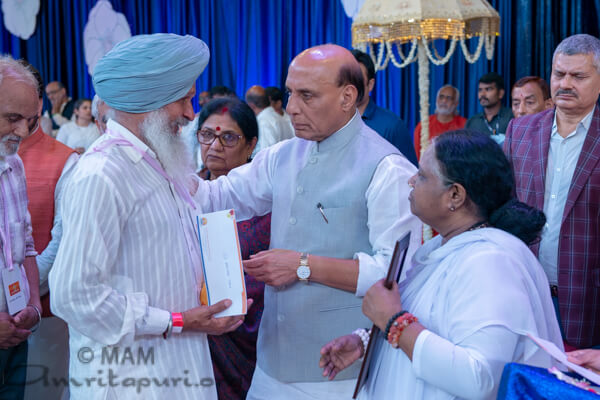 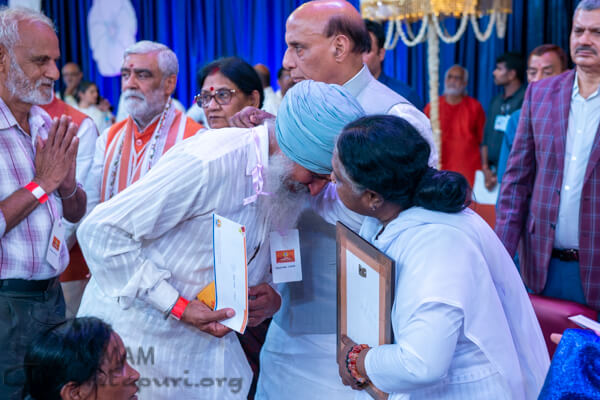 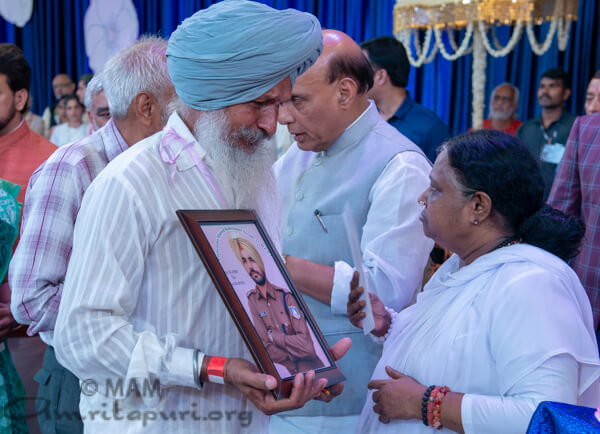 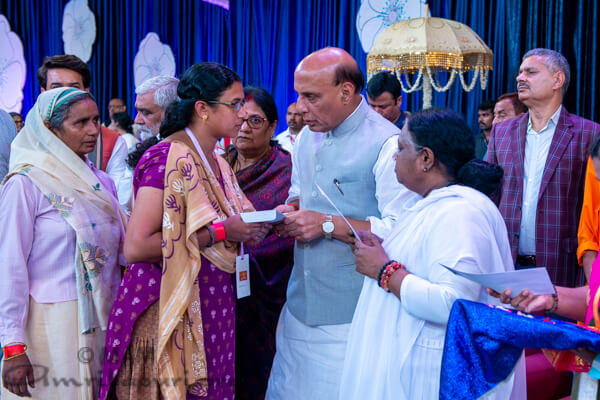 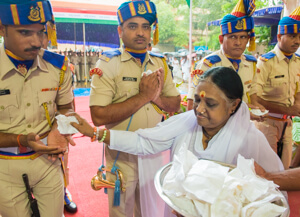 Amma will give ₹ five lakh ($7,000 U.S.) to the families of each of the 40+ Central Reserve Police Force (CRPF) soldiers killed in this week’s terror attack in Jammu-Kashmir’s Pulwama District.

“It is our dharma to support the families of these brave men who died while doing their dharma of protecting the nation,” said Sri Mata Amritanandamayi Devi. “My heart goes out to their families and loved ones. May we all pray for their peace and wellbeing.”

MAM volunteers will visit personally to each family of CRPF troopers martyred in Pulwama and hand over the cheque.

Amma announced the donation as she was travelling to Mysore, the first stop on the second leg of her 2019 Bharata Yatra. 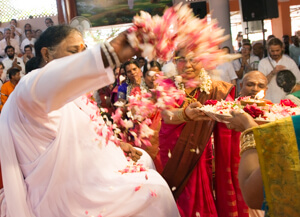 Darshan was nearing its end in the late morning hours in Udupi. Amma had been up all night giving her blessings to the swaths of devotees that had arrived to share in the bliss of her company. Birds fluttered about and the devotees scrambled in anticipation of the impending departure for Talassery.

By the time Amma stood up to head for her camper it was 10:30am. A crowd of people lined the sides of the road as she pulled away from the MGM College grounds in Udupi.

Talassery was only a few hours drive. When Amma arrived she was greeted by a crowd of cheering devotees and a group of ladies singing “Sinkari Melam” over the thundering of drums. In spite of a sleepless night spending giving darshan in Udupi, Amma decided to served prasad to the local devotees and tour group.
The following two days would be filled with all the festivities of a Brahmastanam program. Padmasree Meenakshi Gurukkal, PK Krishnadas, a BJP National Executive Member, and Artist KK Marar would all welcome Amma to Talassery with their moving speeches. Each expressed their deepest regards for Amma.

Artist KK Marar shared his feelings: “Motherhood is very very old samkalpa in the Indian tradition. Mother is the goddess of prosperity, art, knowledge, patience, love, achievement, and joy. Motherhood is the power, the consciousness. I experienced a great symbol of that Indian concept of Motherhood here in Amma. In the little conversation I had with Amma, I was surprised by the depth of Amma’s scientific knowledge of Indian tradition. I consider the presence of Amma is a great blessing who is advising us to keep up the purity of air, water, action, word and mind.” 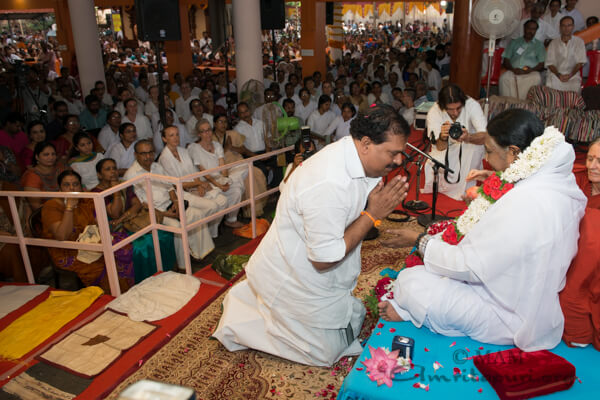 PK Krishnadas spoke of the relevance Amma’s philosophy had in the district of Talassery, a district torn apart by political divisiveness and sectarian violence, “If the people of this district had imbibed the message of Amma, we would have saved ourselves the strife of the recent past. Amma is an ocean of compassion. Amma is not creating any wall of divisions but she is creating the bridges of love and compassion. Presently, people are building more walls than bridges.” Following the speeches, Amma delivered her satsang to the crowd. In it, she noted the grave danger of terrorism in the modern world:
“Terrorism has become one of humanity’s foremost problems, robbing society of its peace. Today, our waking reality is worse than our most terrifying nightmare.

“We say Kerala is ahead of other states in the field of education, but at the same time, our little Kerala is ahead of many bigger states in the areas of religious division, enmity in the name of political views, crime, rape, and other forms of violence against women, etc. Even educated youth from well-to-do families are getting caught up in gangs. They become addicted to drugs and alcohol. Their addiction devastates their own life as well as the lives of others. It is turning life into a living hell full of car accidents, domestic violence, street fights, and the sexual abuse of women and children.
“Today, mankind has become a walking disaster! Natural disasters may not be under our control, but we do have some technology that can signal us as they are approaching. However, science has yet to be able to invent a device that can detect the disasters man carries in his mind.”
Amma noted that an education based on values is one solution to the pervasiveness of division, violence, and destruction. After the satsang Amma sang bhajans, led a meditation, and instructed the crowd in a manasa puja for world peace before beginning darshan. 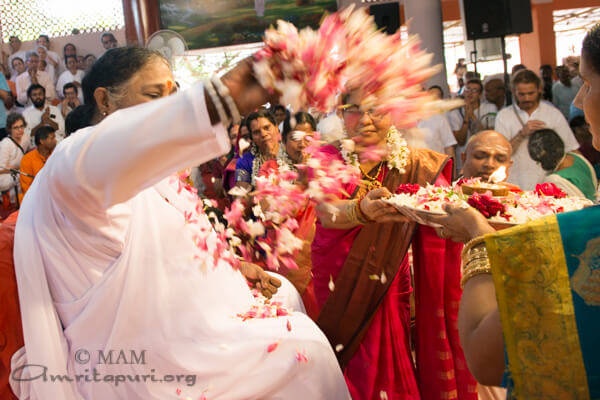 Groups of Amrita Vidyalayam children performed dances, plays, and music on the stage as Amma embraced all who came to see her. The small ashram hall was packed with devotees from day to night. Ten or fifteen meters from Amma’s peetham, the Brahmastanam was alive with worship, as pujas and homas were carried out from the early morning hours until late in the evening. It was a busy celebration in the tiny seaside ashram, one filled with the indescribable atmosphere of excitement and love that follows Amma wherever she goes. 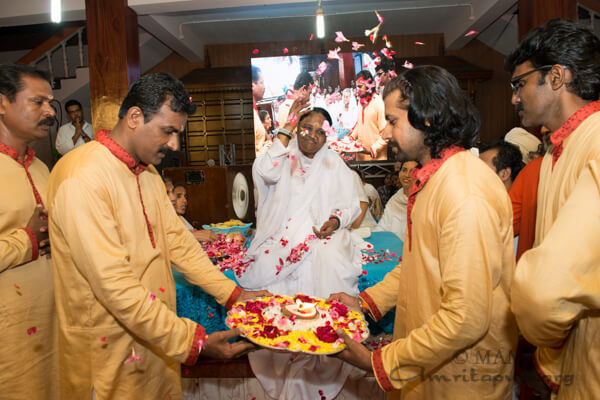 After two long days of darshan, Amma and the tour group packed up and headed into the mountains towards Mananthavady, where Amma would hold another Brahmastanam festival. The residents of Talassery were sad to see her go, offering Amma a warm send off as the 2017 Bharata Yatra continued on. 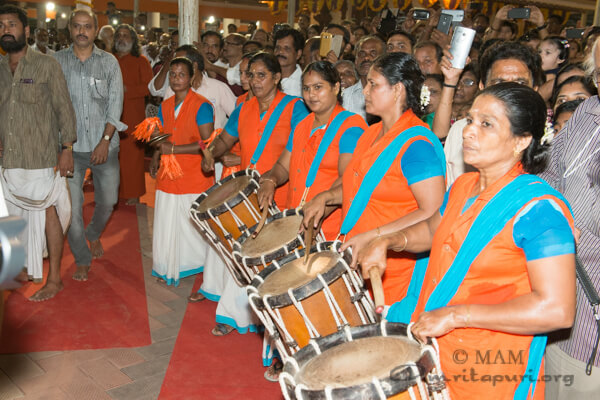 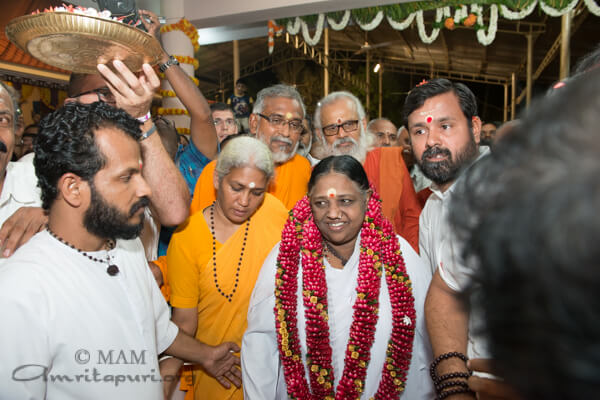 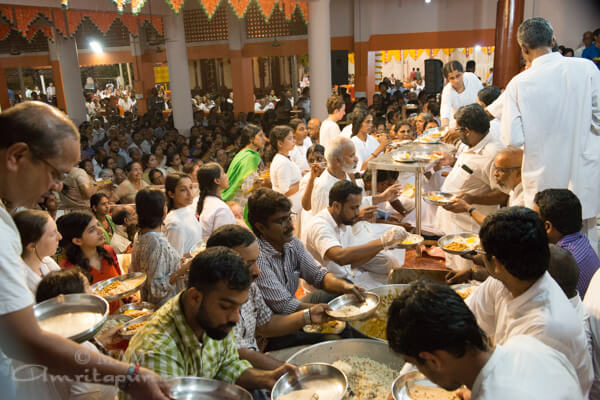 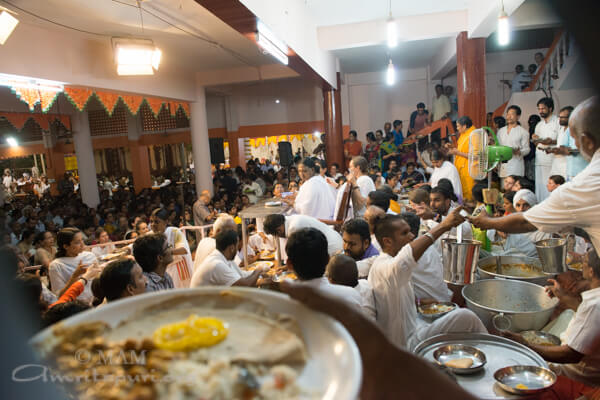 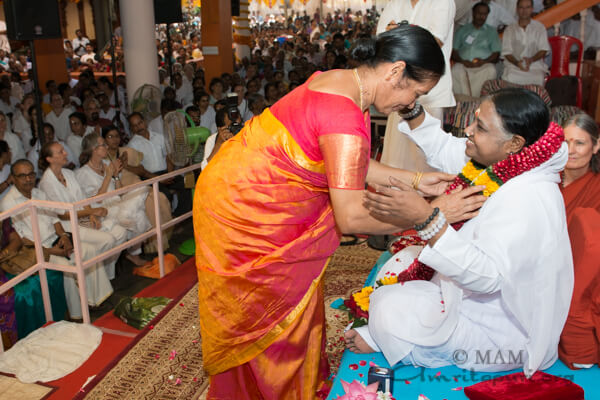 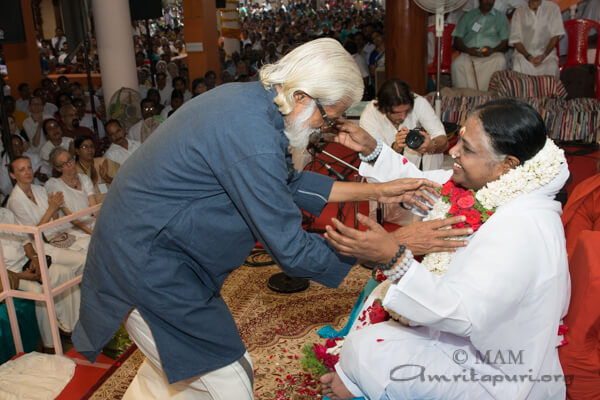 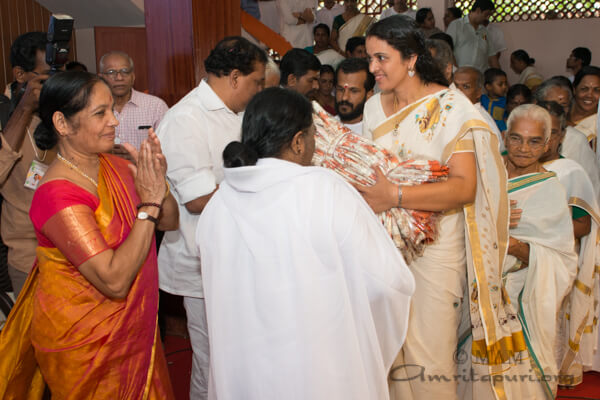 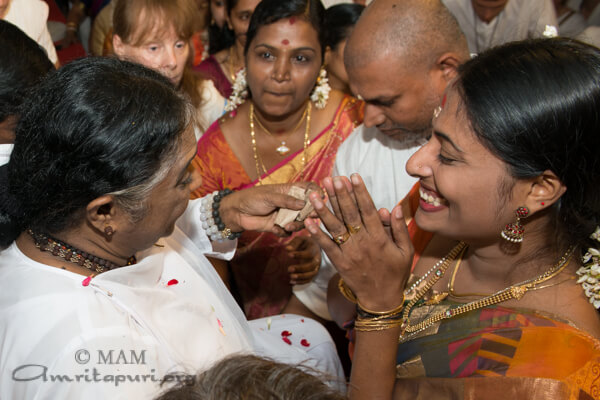 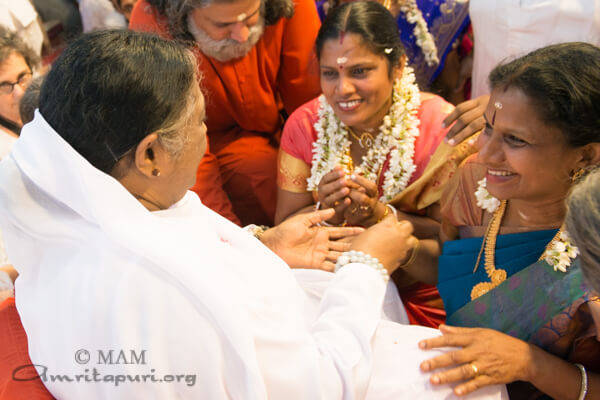 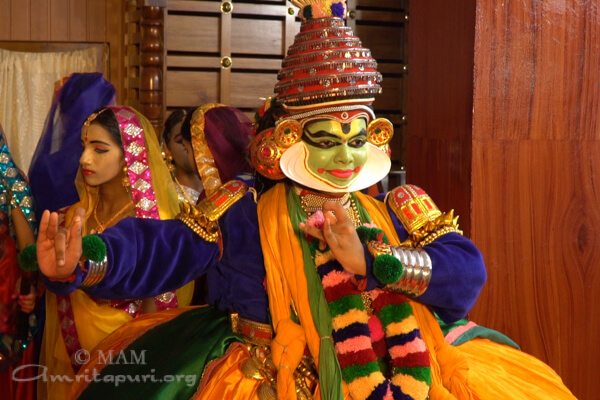 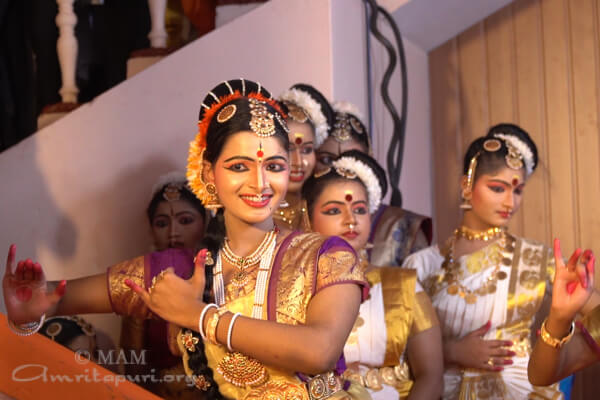