You are here: Home / gratitude 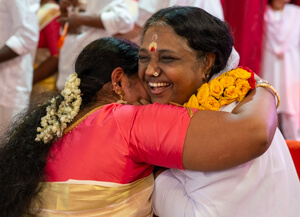 Today Amma celebrated the 30th anniversary of the Mata Amritanandamayi Math taking over the orphanage {news} in Paripally, Kerala. At the time, the ashram was saving up funds to build its first prayer hall, but when Amma learned that 500 orphans who were about to be turned out onto the street, she diverted the funds to assume care of the children instead, and the Amrita Niketanam orphanage (and later, Amrita Higher Secondary Sanskrit School) was born. The orphanage was also the first major humanitarian initiative of the ashram, and laid the foundation for the global movement that is Embracing the World.

To celebrate the anniversary, Amma as well as thousands of residents and visitors to Amritapuri made the trip to Paripally, as did many alumni of the orphanage, young adults who were brought up in Amma’s ashram – often as refugees from situations of severe heartbreak and tragedy – and are now leading full, productive and happy lives.

The alumni took turns sharing their experiences, and describing the impact the loving care they had received at the orphanage had made in their lives. The touching tale of two sisters, Radhika and Revathy from Konny, {blog}, who were orphaned and disowned by their relatives after their father murdered their mother, and who found refuge in Amma’s orphanage and grew up literally under her loving and tender eye, left hardly a dry eye in the assembled crowd.

Nanjan, who came to the orphanage from a poverty-ridden Attapady village, also narrated his journey of life under the care and compassion of Amma to become an engineer at Kerala State Electricity Board. Mahesh, now a company executive in Bahrain, shared how Amma helped him achieve his goals in life through his residential study at the orphanage.

Another alumna, Saumya, categorically stated that she felt as safe as in a mother’s womb during her days at Amrita Niketanam. Children who have grown up to be Ayurvedic doctors, patent holders, ward members, airport staff, running beauty parlours, barber shops, motor repair shops, and farms all shared their stories, transforming the celebration into a deep expression of gratitude.

Amma gave darshan to the alumnae, listening to their stories, her eyes beaming with the love of a proud mother. Current residents of the orphanage also presented different cultural programs. As was fitting for the Sanskrit school, each dance and cultural program was introduced in Sanskrit.

Amma inspired both current and former residents: “At a time when we witness a deterioration in basic human values, abiding in those very values you tried to share love and brotherhood among all. Children like you are Amma’s wealth and joy. People say that we should not forget the path we have travelled. It means that we should be grateful. When our heart is filled with gratitude, love, sacrifice and other human values will shine automatically.”

Additionally, Amma honored the retiring faculty, and 25 alumni in need financial assistance were given a grant of Rs. 25,000 each. In honor of the orphanage’s 30th anniversary, Amma presented 30 saplings to the returning alumni. Meanwhile, current residents have been regularly planting trees on the orphanage and school grounds. Altogether, they have planted 1,000 trees. During the program, they presented the 1001st tree to Amma for her blessing and to later also be planted on the grounds.

Before departing the campus, Amma didn’t forget to take group photographs with the alumni, leaving them with a fresh memory to add to the countless precious moments they spent with Amma as children under her loving wing. 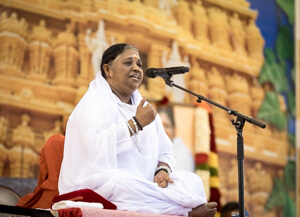 It was a rainy night filled with lightning and thunder in Bengaluru. Amma, having just arrived from Mysore, was serving prasad to the tour group and all the local volunteers.
She asked if anyone had a question. One devotee from the tour group raised his hand and Amma passed him the microphone. He began to read a prayer of thanks and gratitude, acknowledging the hard work of all who contributed to each program: those who traveled from far, those whose town was hosting Amma, those who arranged all the equipment, those who cooked the food, those who provided transportation, all the various people and roles that helped to make each program a success. It was a heart-warming prayer that all enjoyed.

Amma smiled as the prayer was translated to her. Then she began her response:
“The attitude that you have is very inspiring. It is important to have the attitude of an beginner, and to have respect for everyone. The beginner inherently has three crucial qualities: sradha, patience, and enthusiasm. With these qualities you will naturally bow down to everyone, and thus, you will have humility. Having the attitude of a beginner means embodying these three qualities (sradha, patience, and enthusiasm). When you become a zero, you become a hero.

“We should try to cultivate an attitude of gratitude. That will help us to earn God’s grace. Amma prays that this attitude grows more and more in you.

“Just as Amma’s programs are organized by many individuals, their co-operative effort, we must see the unity all around us. We need to cultivate that ability to perceive the unity around us.

“If we look at nature, we see that nature works in unison despite the immense amount of diversity. There is a uniting thread across all in this universe. We believe that the creator and the creation are not two, the creator has, himself, become the creation–that is why we respect each and every thing. When we enjoy the creation, we need to remember the creator, just as when we enjoy a delicious sweet, we look to see what producer manufactured the sweet.

Talking about the need for right knowledge in our action, Amma narrated an anecdote: “There were once four men working to plant a garden. The first would dig the rows, the second would place the seeds, the third would cover the seeds over with soil, and the fourth would water the freshly planted seeds. After some weeks no plants emerged. Someone who had been watching them work on the garden asked why there were no plants. The fourth man said he had watered the ground, the third said he had covered over the holes, and the first said he had dug the holes. They all said it was the fault of the second man, that he did not plant the seeds.

“Like this, we need to have knowledge before we act in order to reap the fruits of our efforts, otherwise our actions will go to waste. Knowledge is essential for any action. If knowledge is not there, it is like pouring milk into a dirty vessel, it will spoil all our hard work. 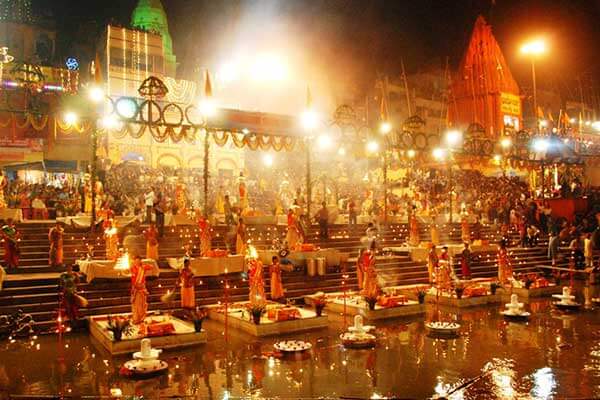 Ganga arati: worship of the river

Why We Worship Nature

“We need to teach children at a young age to respect nature. Love towards nature, that respect, turns our actions into worship.

“Amma travels to North America each year. When Amma was in Canada for her annual program there, she noticed an artificial waterfall at the hotel in which the program was being held. In the pool below the artificial waterfall, Amma saw many coins, and so she inquired as to the cause of these coins in the water. She found that some Indians from Tamil Nadu had visited the hotel. Indians worship rivers as Devi, this is their samskara, and as result they offered coins to the artificial waterfall as they would a river. Everything in nature is a divine, and so we offer something to it as a symbol of our gratitude.

“These practices, such as not urinating in the river, are not for the benefit of the river, they are for our own benefit. We will be the ones who return to the river day after day for bathing and drinking water. This restraint keeps the river pure for our own use and benefit.
“This type of attitude leads to inner purity and outer purity. It is not enough that we only have gratitude to human beings, we also need to have gratitude to insentient objects as well.

“The tailor, before using his sewing needle, bows down to it, because without this instrument he could not perform his work. Similarly, the writer bows down to the pen before writing, because without the pen he could not write a single word. When we have that attitude of bowing down, we become receptive to the grace of God. This is the purpose of the Ayudha puja. It is a worship of all the instruments that we use in our daily life. That samskara is part of life in India. 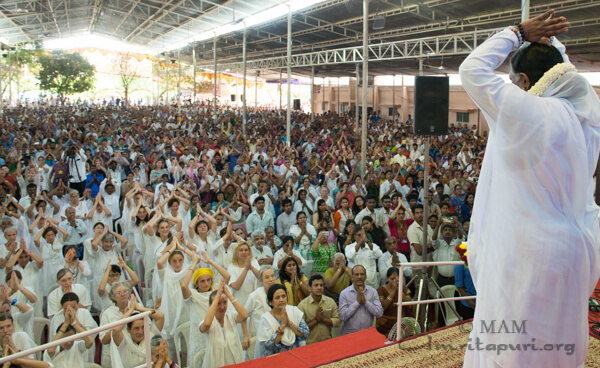 “When we have the right attitude, every action becomes a worship.” Quoting an example from the Puranas, Amma relayed the story of Daksha, who egoistically performed a yagna1 that was the cause of a vicious war. Similarly, she cited how Arjuna fought in the war, and yet, his attitude of surrender to Lord Krishna transformed his warring into a yagna.
Amma concluded, saying, “Surrender creates a path that takes us to our own self. We have the infinite power source within, but to connect, we need surrender.”
The crowd was quiet after Amma spoke, humbled by her words.

Then Amma began a round of bhajans accompanied by the thundering sound of rain and the loud cracks of lightning.
It was an event all would remember, one filled with the contemplative attitude of devotion and the passion of nature’s storming.

[1]: Yagna means a confluence of many cooperative factors for the purpose of a common goal.