Amma met with President Chandrika Kumaratunge on 18 February at the President’s residence in Colombo. Amma told the president that She would like to build 300 homes for Tamil and Sinhalese tsunami victims in Sri Lanka and expressed her willingness to provide more relief aid, such as free pensions and the adopting of orphans. 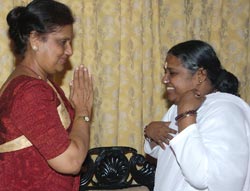 Amma also expressed the need for the men and women of Sri Lanka to awaken their universal motherhood—qualities such as love, compassion and patience.

During the discussion, President Chandrika Kumaratunge expressed to Amma that there has been so much strife and trouble in her country. Some progress was being made with the peace negotiations, but now with the coming of the tsunami, there once again is so much trouble and pain. Amma told the president that she indeed felt the pain of the people. Amma told her that as in every situation a favourable outcome depended on two factors: human effort and God’s grace. 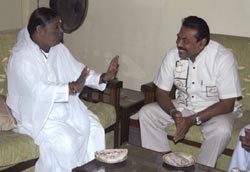 On 17th Amma travelled by helicopter with Sri Lankan Prime Minister Mahinda Rajapakse to a Sinhalese tsunami relief camp in Hambantota, where She participated in the camp’s foundation-stone-laying ceremony. Amma then flew back to Colombo, where She and the PM are to meet with President Chandrika Kumaratunga later this evening. 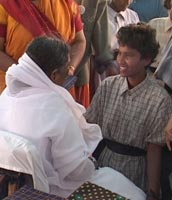 Earlier, Amma had spent more than one hour with the PM discussing the Ashram’s tsunami-relief efforts, including its plan for building tsunami-proof homes. Amma told the PM that She is willing to establish an orphanage for Sri Lankan children and a free-pension scheme in the country. If the circumstances permit, Amma said, She would do more. Upon the conclusion of their
discussion, the PM expressed the Sri Lankan government’s gratitude for the help and compassion Amma is showering upon the country.

On 17th, Amma visited a Tamil relief camp in the district of Ampara, where she distributed 15,000 free saris and dhotis. At the camp, Amma gave darshan to 5,000 people, including 15 LTTE officials and 20 members of a Tamil Special Task Force. Maheswari Velayudham, the political secretary to Minister Douglas Devananda, was also in attendance. The secretary was overwhelmed at seeing the two groups peacefully together. “Amma is the unifying force,” she said later. “She is the catalyst. Only Amma can bring all these people together.” 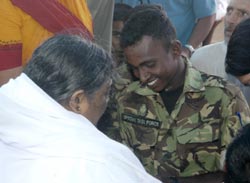 At a press conference earlier that morning, one of the reporters had asked Amma whether she could predict when Sri Lanka would enjoy peace in full spirit. To this Amma responded, “We can awaken a person who is sleeping, but cannot awaken a person who is
pretending to be sleeping. We should keep trying for peace. Feeling sympathy alone is not enough. We should work hard for it,” Amma said, adding that peace is possible only when spirituality is practiced.