On New Year’s Day, I went with a group of 25 men from Amma’s Ashram to visit two relief camps in Kayamkulam, where many families were staying whose homes had been destroyed by the tsunami. The idea was that we would clean the toilets, so we brought buckets and toilet brushes, disinfectant and rubber gloves. The first camp was located in a school building, and was quite crowded with people. Finding that the toilets there had already been cleaned, we started picking up garbage in various locations around the site, getting right into the drainage ditch to fish out plastic cups. Soon we had several young spectators. 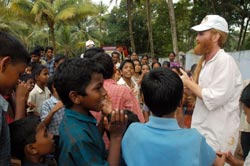 Soon I found myself surrounded by beautiful children, and was learning all their names and joking with them, and when the garbage work had finished I started playing patty-cake with them and dancing and singing. They responded with so much love and joy.

Soon I realized this was what I had really come to do that day—to play with the children. Children live so much in the present that even in the midst of disaster and suffering they are quickly able to let go of pain and fear, and open right up to joy. After an hour or so of great fun, drumming on a garbage can, hopping around on one foot, and playing in various ways the role of a circus clown, a very old lady came out, and giving me a very sweet look, started singing a song! She beamed and giggled like a little girl. It felt like all the hearts were blossoming, as if Amma was there sharing Her bliss with everyone.

A similar story unfolded in the next camp. As soon as we walked in, several of us started playing with the children, and we instantly became their trusted playmates. My friend Chidanand lifted up the smallest boy on his shoulders and went running around the yard, while we all went chasing after a big ball. Soon we had learned many of the kids’ names and were playing every game we could think of, anything to make contact with them and see them smile. Even the shyest of children seemed to be opening up, and parents too could not hold back their smiles. 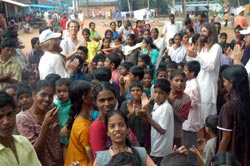 A homemade cricket bat and ball were reverently offered to us. It seemed the kids wanted to see if Westerners could play. (Or maybe Amma was just satisfying my latent desire to give cricket a try—I don’t know) Soon I was swinging wildly and occasionally actually hitting the ball, and the kids loved the show. The cricket soon finished and we started singing. Within a couple of minutes, I was surrounded by at least 30 children singing with me at full volume, with joy all over their faces. I couldn’t believe their beautiful exuberance and what a wonderful connection had been made in such a short time. I felt Amma was there, making it all happen.

I have always believed that happiness and sorrow are like the crests and troughs of waves on the Ocean of Peace. Underlying all the situations we experience in our lives, no matter how painful or traumatic they may be, there is an infinite expanse of bliss and eternal peace, which is our true nature. These kids reaffirmed that truth for me. Although their homes and possessions had been destroyed, and maybe some of their family members and friends killed by the tsunami, they were instantly ready to let go of the pain and share love and joy and laughter with whoever gave them a smile.

What a blessing it was to be with them and to receive their teaching.
–Ram Das