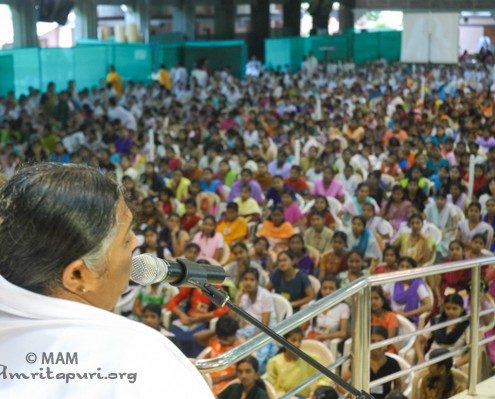 On Friday, Amma held a second question-and-answer session with the children participating in the Amritam ’07 Personality Development Camp.

Before Amma began answering the children’s questions, she told them all that she expects to see some change in them after their completion of the five-day camp.

“After participating in this camp, there should be a change,” Amma said. “When you go home, hug your mother and give her a kiss. Hug your father and give him a kiss also. Touch their feet. You asked so many good questions! You are such good children.”

Amma also mentioned how she had learned that one child in the camp had spent their pocket money on new clothing for his mother and father. “This makes Amma so happy,” Amma said. “Usually children only do such things when they are older and have a good job.”

Amma then told the children a story about Yudhishthira from the Mahabharata, wherein the young prince shows how he did not learn his lessons mechanically, but imbibed them and put them into practice as well.

“We have to look into our self, look into our own weaknesses,” Amma told the kids. “You should remember that ‘I am a child, but I’m still a part of society.’ Eat when you need to eat. Do everything—playing, watching TV, etc.—in moderation.”

Next Amma gave the children some instructions to help them cultivate a love for Mother Nature and to help them see the sentience of all living things. “Each of you should plant 10 banana trees and look after them,” Amma said. “If there is no courtyard around your house, you can grow vegetables in a pot on your terrace. Water them daily and give them a kiss. All of you should be able to generate at least one month’s worth of vegetables every year from your own plants. You should also plant tulasi [sacred basil] in front of your house. Water it and give it a kiss every day as well. Tulasi and peepul trees have a special energy around them. Every day you should reverently circumambulate the plant.”

Amma also talked about how actions are made positive or negative by the motivation behind them. “With a pen, you can write beautiful poetry or abuse someone. With fire, you can burn down a house or cook food,” Amma said.

Amma then explained to the children how, for success in life, three factors need to come into alignment: proper effort, proper time and grace.

“You are healthy today, but you may fall sick tomorrow. So study well now. Try to do as many good things as possible. Try to learn to laugh at your own foolishness,” Amma said. 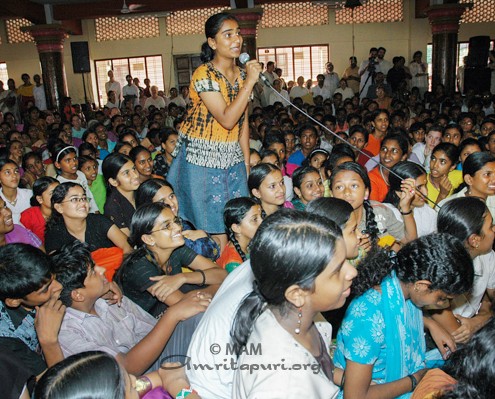 Amma ended by explaining to the children how important it is to cultivate good values, saying how without values even if we are skillful, no one will look up to us or respect us. She cited as examples Mike Tyson, the former heavyweight boxing champion who disgraced himself towards the end of his career by biting off the ear of one of his opponents, as well as cricket stars who threw games for money; who loves money more than their mother land.

“Mistakes may happen, but you should repent and resolve not to repeat them,” Amma said.

Once again, the children demonstrated their precocity and thirst for knowledge, posing questions on topics from the annihilation of the ego to burning social issues. Some questions included: “Why are Hindus allowed in churches but non-Hindus not allowed in certain temples?”; “What is life: reality or maya?”; “How can we transcend the ego.”; “I don’t want to know what I did in past life; I want to know what I should do in this life.”; “Why does Amma touch the broomadhya [point between the eyebrows] to some people when she gives them darshan?”; “Amma, the whole world worships You? How does this make you feel?”And one girl asked Amma to say something to both the boys and the girls regarding India’s child-trafficking problem.

The session ended with a request by the children for Amma to sing the bhajan “Mata Rani.” Amma acquiesced and soon the entire bhajan hall was clapping hands and dancing to Amma’s song.