At 8:00 a.m. all the ashram residents rose from their meditations and walked to the kalari, where they were each handed a flower. Then, in a single-file line, they walked out of the Ashram, toward Azhikkal, the village in Alappad Panchayat where 42 people were cremated a few days after the 2004 tsunami. The day marked the second anniversary of the tragedy. 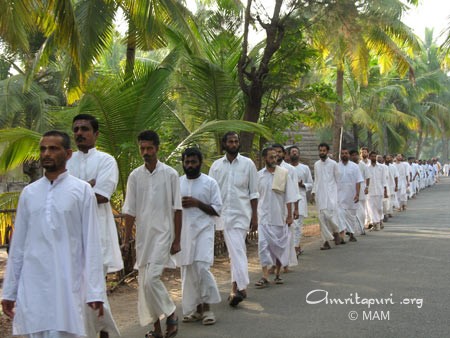 It was a silent walk, a meditative one—the cool breeze of morning still in the air. Every so often, the ashramites would pass a family offering prayers for the souls of a departed loved one at small temporary shrines. When this occurred, one of the brahmacharis would invariably leave the line and offer his flower at the foot of their memorial. 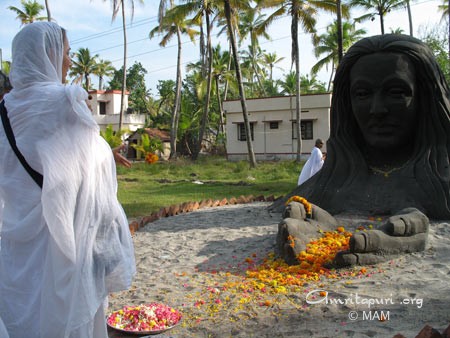 When they reached Azhikkal, the ashramites circumambulated the cremation site and then did the same at the nearby tsunami monument—a permanent statue formed from black sand, symbolising Mother Land praying to Mother Sea to maintain her boundaries. There, the ashramites offered their flowers, pranamed and began silently walked back to Amritapuri. 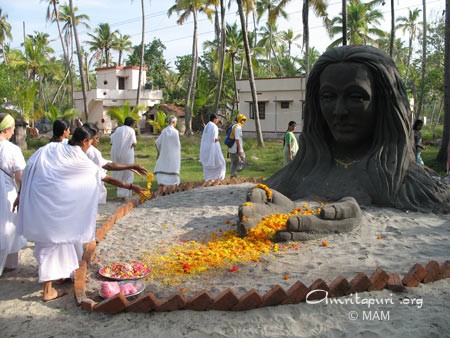 It wasn’t long after everyone reached the ashram that Amma came down for meditation and satsang. At this time, Amma asked everyone to spend one minute in prayer for the peace of those who had died two years earlier, as well as for harmony between man and Nature.