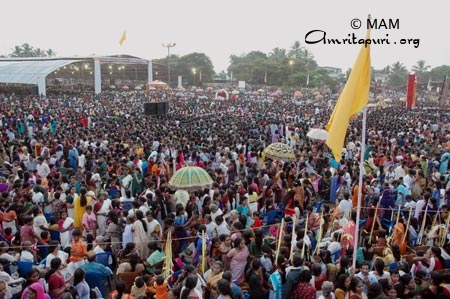 “In Sanatana Dharma, the Creator and creation are not two,” Amma said in her satsang. It’s a point Amma almost always makes, but somehow when Amma says it just prior to embracing tens of thousands of people, it carries some extra impact. Amma doesn’t just make the statement, she demonstrates, dramatically, just how one she is with that truth. 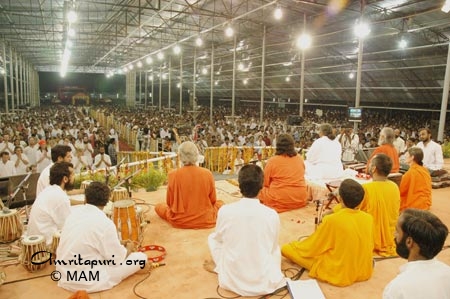 Amma didn’t only embrace the people; they were fed as well. A temporary kitchen was erected next to the stage and everyone was served a free lunch and dinner.

The Ashram also took the occasion of Amma’s Kottakkal programme to add to its Amrita Nidhi pension programme—extending it by another 1,000 people, all from the Malappuram District.

Twenty or so of the beneficiaries came to the programme to receive the certificate of their enrolment in the programme and the first allotment of their supplementary income. Several of the women suffered from extreme deformities of the legs and had to be carried over to Amma. One girl—who had some disease that made her entire body as stiff as a board—beamed forth the biggest smile when Amma kissed her cheek. 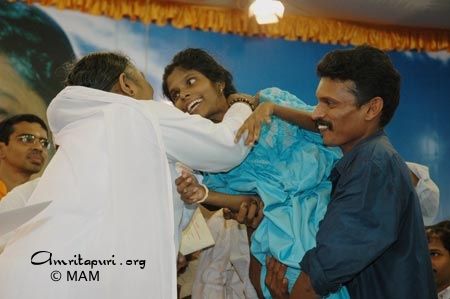 Other beneficiaries included Gangadharan, a man whose property is about to be auctioned off by the bank due to his inability to repay Rs. 50,000 loan; Smt. Nafisa, who has no income and whose father suffers from debilitating asthma; Smt. Salina, who is studying home nursing but is having trouble making fees due to lack of money; and Bhushana, who is mentally retarded and yet has four children.

The pensions were officially distributed by Smt. Srilekha I.P.S., the Inspector General of Police of Central Kerala, and Sri. A.P. Anilkumar, the Honourable Cultural Minister of Kerala, and former Kerala minister Sri. Gangadharan. Also on the dais were Padmasri P.K. Varyar, the managing director of Kottakkal Arya Vaidyashala, and the Malayalam film-star Sri. Sriraman.

In Inspector General Srilekha’s speech, she said that in her world of cruel faces there is always one sweet smile to think of, the face of Amma. She also questioned—when the world keeps presenting various awards to Amma—why India has yet to award her its Bharata Ratna [the Jewel of India Award]. When she said this, everyone in applauded.

Today, Amma will travel on to her ashram in Kozhikode, her Vrindavan, a place where she regularly gives darshan to 25,000 to 30,000 people a day for three days. Only for one such as Amma, who abides in the truth of advaita—the fact that the Creator and the creation are not two—is such a thing possible. 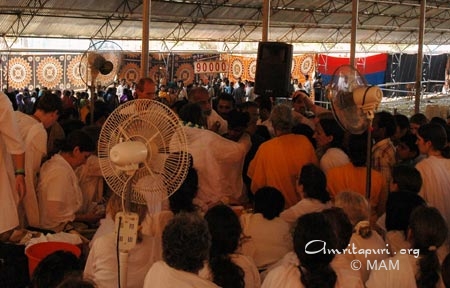 The next day at 12:30 p.m.—18 and a half hours after Amma had come to the hall—the darshan token numbers were on 79,300, and the programme grounds were still full. As one brahmachari commented at that time, “It looks like the beginning of a programme, not the end!”

The massive programme was only possible due to the incredible amount of help that came at the hands of devotees—many old and some new. The official number of volunteers was 8,000, but this does not count the thousands of others who simply lent a hand out of their in-the-moment inspiration. These included approximately 100 Muslim youth, who went house-to-house, distributing leaflets about Amma and her visit to Kottakkal.