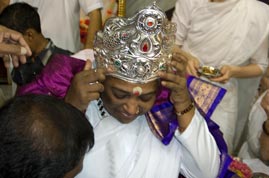 29 December 2007 – Amritapuri
This morning 75 tsunami survivors from Samanthampettai, Nagapattinam came for Amma’s darshan. Three years ago when the tsunami waves ravaged India’s west coast, Nagapattinam caught the worst of it, and in seconds more than 7,000 people were killed.

Amma has visited Nagapattinam twice since that fateful day-once in February 2005 and once in January 2007. Each time she has dried the tears of the affected people, encouraged them and helped them get back on their feet through an inundation of relief programs. Thousands of houses have been built; fishing boats, engines and nets have been supplied; as well as food, medical provisions and education programs. Although the villagers will carry the pain of losing loved ones for the rest of their lives, Amma has softened that sorrow through her the sweetness of her love and compassion. Furthermore, from a material perspective, there is no doubt that the villager’s lives are now better than before that fateful day.

When the 75 villagers came for Amma’s darshan today, they thanked her profusely for all she has done for them and then crowned her as their personal goddess-bestowing her with a diadem, sword and trident, just like those wielded by their protective Mother, Goddess Durga. Amma accepted the offering and quickly called a brahmachari to bring each of them a new set of clothes, which she then personally distributed.