The third annual AYUDH US Youth Exchange, “Give Peace a Chance,” took place from December 26 to 29, 2009 at the M.A. Center in San Ramon, CA. Led by Br. Dayamrita Chaitanya, the exchange included a multitude of spiritual, cultural, and service activities for over 65 attendees. Besides daily yoga and meditation, one of the retreat’s highlights was preparing and serving breakfast and lunch for the soup kitchen at Glide Memorial Church in San Francisco. The Church was featured for its hospitality in the 2007 movie “The Pursuit of Happyness.” Each meal served over 1,000 needy individuals. AYUDH’s positive attitudes and spirit of channeling Amma’s message of love and service was evident. “Helping at the soup kitchen made me realize how much attention and awareness is needed in doing seva. It was nice to see how we could serve Amma through different ways,” said Lizzie Corley from New York.

Given the youth pledge to support Amma’s Green Year through ‘Growin‘ One Seed at a Time, AYUDH members learned about the benefits of organic farming and the potential harm of using pesticides with an inspiring activity led by Kalesh, an expert in the field. Members planted fava beans and built a compost structure in AYUDH’s organic garden. 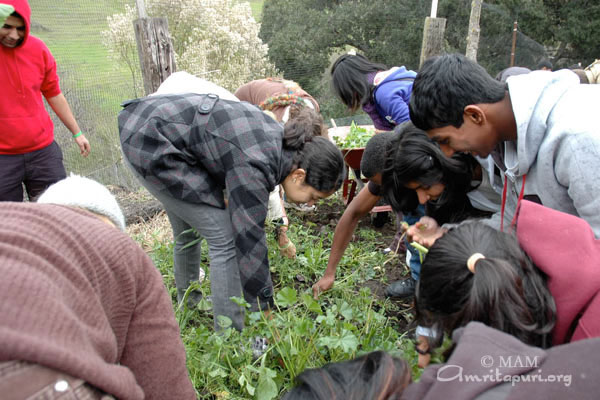 Another feature of the retreat included a scriptural class on the 12th chapter of the Bhagavad Gita, Bhakti Yoga, and a bhajan class, both led by Br. Ramanand. He taught the Mahishasura Mardini Stotram in a unique and lively tune. AYUDH also learned the retreat’s theme song, from Sharani Eastman and Swarna Iyer. “Give Peace a Chance” was written and tuned by AYUDH Europe. 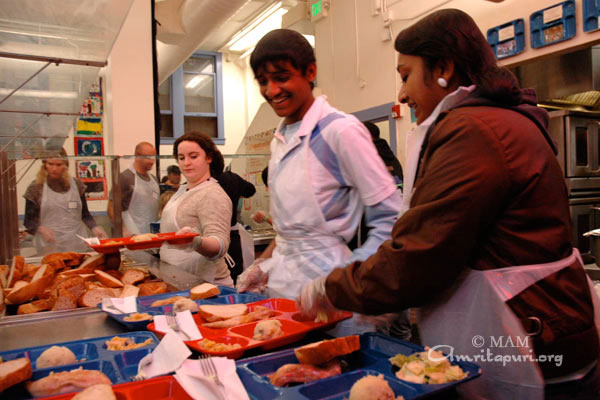 AYUDH members watched clips of Embracing the World’s humanitarian initiatives, pledging to support ETW activities in creative ways. Anu Iyer gave a touching account of her experience meeting children in Amma’s care home in Kenya. Local AYUDH member Shivesh Rameshbabu later shared, “This taught me about some of the problems in India and around the world. It made me want to help and think harder about ways to help. I may not even have to go out of my way to do this!” Ideas included eyeglass donation drives, holding benefit concerts, and using the Internet as a venue to both publicize and fundraise for ETW initiatives.

Each day, AYUDH members led the nightly bhajans and arati.

To conclude the exchange, all were treated to an interactive and inspirational class via webcam with Swami Amritaswarupananda, in which he gave valuable advice about rising to the challenge of being Amma’s youth. Following an enjoyable outing to the Golden Gate Bridge in San Francisco, AYUDH USA members returned home, enthused and energized to give peace a chance in 2010.