As a frequent visitor to Amritapuri, I have often watched my beloved Amma feed the elephant Ram after bhajans everyday. It is such a joy to watch the spontaneous and innocent interactions between the Mother of the Universe and Her elephant son.

Nevertheless I have sometimes wondered why Amma spends so much time on this simple activity. After all, anyone can feed Ram. Can’t Amma rest during that time? Or perhaps attend to the more important tasks of Her institutions so that She can get to bed early?

It is said that it is impossible for us to understand the ways of a mahatma with our limited intellects. Amma, as our Guru, teaches us in so many ways.
Through the simple stories She narrates again and again in Her satsangs, and especially through the examples of Her own actions. Could it be that this seemingly simple task of feeding Ram is also another means for Amma to teach us? This thought came to mind as I watched Amma with Ram recently one day…

Ram, in his carelessness, or maybe eagerness to get the food from Amma’s hand, had let most of it fall on the ground. As he tried to grab at Amma for more food, She told him to pick it up from the ground and eat that first. But Ram didn’t listen. He tried to reach for the bananas kept some distance away. Amma did not relent either. She sternly repeated that first he was to eat the food he had thrown down, only then would he get any more food. Finally, seeing no other alternative, Ram started picking at the food on the ground.

Amma stood by Ram’s side, quietly and intently watching him, as he swept up with his trunk, morsel by morsel, the food he had thrown down. Amma looked on, the very embodiment of supreme patience, as She waited for Her child to correct his mistake. Only after Ram put the last morsel into his mouth, did Amma smile and reward him with more food.

Watching this episode, suddenly I saw reflected in it the exact image of how Amma guides us also. She instructs us, but if we don’t listen to Her, She may scold us. We may still not listen, but yet she waits patiently, relentlessly. Finally, perhaps seeing no other alternatives, we finally proceed to do the right thing, and She stands by our side the entire time, looking on. No matter how many mistakes we make, She doesn’t once give up on us. Rather She waits patiently for us to learn and imbibe our lessons. And when we do, She is there to reward our efforts with much Grace.

It is said that all of a mahatma’s actions have deep meanings. It is possible that there are many beautiful lessons to be learnt from watching Amma’s leelas with Ram. And it is also possible that Amma simply takes the time to feed Her pachoderm child everyday so that Her human children may experience intimate and fun-filled moments with Her. In the early days, when the crowds were smaller, such moments were many. But today thousands come for Amma’s darshan, and the ashram runs many big institutions, so such times are rare.

But, wait! That’s not exactly right. Because, somehow, amidst the ever-growing whirlwind of responsibilities and activities, Amma yet manages to create precious moments just like this, that let us know She is still, and always, our caring and attentive Mother first and foremost.

After all, Amma does make the time to feed Ram everyday. 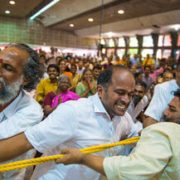 Ram is growing up!