This morning Amma began Her yearly programs here in Los Angeles, CA, USA. But before Amma could begin to receive Her children, She was officially honored by representatives of the Los Angeles County, its Board of Supervisors, and the city of Los Angeles. 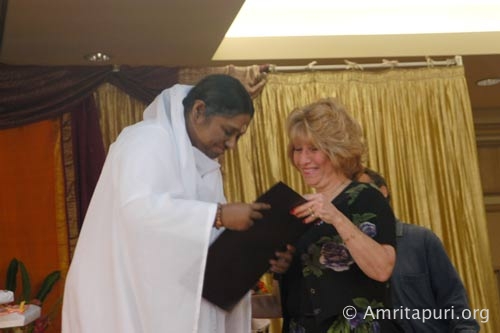 The Los Angeles County Board of Supervisors and its constituency of 10 million people were represented by Susan Nissman, senior field deputy for District Supervisor Zev Yaroslavski. Ms. Nissman officially welcomed Amma, and presented Her with a Commendation “For Her Humanitarian Endeavors Throughout the World…In recognition of dedicated service to the affairs of the community and for the civic pride demonstrated by numerous contributions for the benefit of all citizens of Los Angeles County and the World.” Ms. Nissman additionally honored Amma by adding that Her “constituency is colorless…and She makes no judgement in terms of healing, and Her good works.”

Next Amma was honored by Sherri Adams, field deputy for City Councilman Dennis P. Zine for the Woodland Hills District of LA. She presented Amma with an official Certificate of Welcome to Los Angeles. On the certificate, the full name of this city was given as: “El Pueblo de Nuestra Senora, La Reina de Los Angeles,” which literally translates to mean that Amma was being welcomed to, “The community of our Lady, the Queen of the Angels.”

In reception of the honors, Amma said that this official welcome by the City and County “was an expression of Love and Compassion and…showed the large-heartedness of Los Angeles…”
She added that “Love is overflowing everywhere, nothing can obstruct love, and there are no barriers for Love…There is no key that can lock love inside, because love overflows, crossing all limitations, all barriers.”