Amma had finished playing with Ram; normally, She would go up Her steps to Her room.

This night was different.

Instead, suddenly She made Her way to the front steps of the temple. It seems the computer students from the ashrams’ Institute had arranged a special fireworks display for the night before Vishu (New Year’s day in Kerala.)

So there She sat, surrounded first by the few who had trailed Her from the Ram playtime, but then by more and more, until probably two or three thousand residents and devotees had gathered on the steps, in the small “cupolas”, beside the lions, near the front gate and the bookstall and the banyan tree, and on the roofs and verandas of the brahmacharinis’ quarters and the flats. 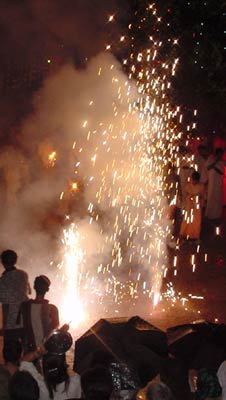 You jump; She doesn’t seem to. But She laughs, shoves the shoulder of someone sitting near Her.

You know the first BANG!! is coming, from the hiss, and you are ready this time, and don’t jump. But the next two bangs are surprises. You jump. Did Mother? Her eyes are dancing; Her face is glowing in the light from the sparklers that She and some children near Her are holding. But She seems to be simply sitting there, rock-solid.

Is it your imagination?

No hiss this time, and no preparation-you jump. But Mother is leaning over close to one of the devotees, saying something that seems to be serious. Even though this particular BANG wasn’t specifically expected, it didn’t seem to have startled Her nor to have taken Her attention away from what She was engaged in.

Maybe one of the times you were jumping Mother was too, so you can’t be certain She was never startled on this firecrackers night. But all those times you saw Her NOT jumping might have stirred a memory of one of the examples She so often gives:

Mother says that if we know fireworks will go off nearby, we’re prepared, and not shocked when they do. Similarly with life: if we understand the nature of life-that it is never all pleasant and easy: there are both good times and bad, gains and losses, joys and suffering-then when the hard times come, we won’t be rocked. We can face anything life brings with equanimity.

Even if Mother did jump once or twice during the fireworks display, you can safely bet that She is never rocked by anything in life. She knows what life brings-ups and downs—and has no expectations to be shattered.