Volunteers from around the world came together at Amritavarsham60 to help manage the waste from the huge crowds that descended on Amritapuri. Helpers from as far away as the USA, Italy, Finland and France toiled with Amrita University students and locals to sort rubbish and compost food leftovers from the hundreds of thousands of visitors to the program. 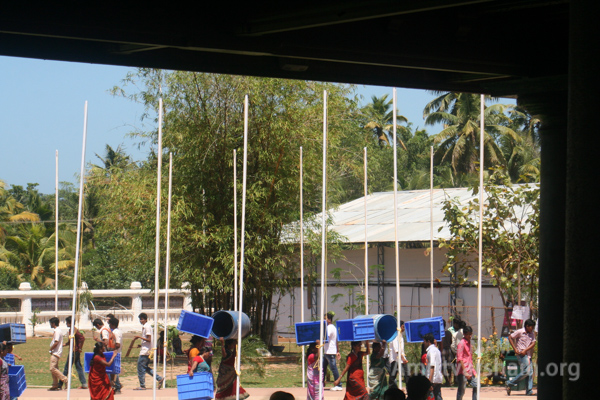 “Workers from many countries volunteered to help,” she said. “One hundred people were working every day at the waste management center at the Ashram in shifts ranging from two hours to eight hours, from 7am to 7pm. We also had 250 students from Amrita University on the ground at the site.”

Four vehicles worked full-time transporting the waste. General waste for recycling was transported back to the Ashram for sorting, however, thirty male volunteers from Kozhikode helped to pick up food waste, which was then deposited at the new Eco Village located near Amrita University.

“One of the biggest achievements of the team was that one third of the entire waste from Amritavarsham60 was composted at the new Eco Village, which is located near the site of the birthday,” Mahita said. “This is a great result for such a large event.”

The volunteers at the Ashram continue to sort trash one week after the birthday, sorting an average of 40 x 120 litre bins of plastic and 30 x 120 litre of paper every day.