Mother is still playing with Ram the baby elephant after bhajans, but the scene is changing, because Ram is growing! 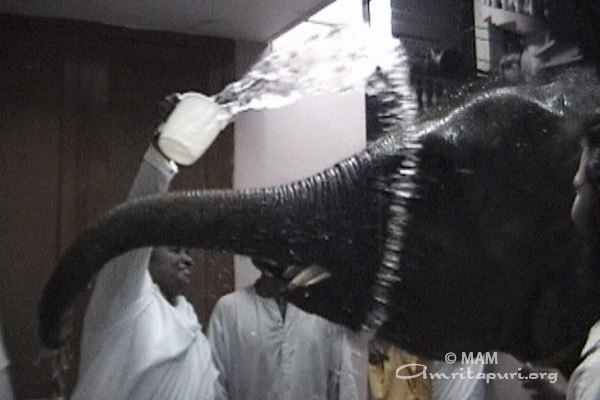 He is much bigger and seems to have matured, not that he is old but he does seem to have more dignity and a certain bearing. Now the crowds who gather after bhajans, eager to watch Mother and son, are kept a safe distance away by restraining ropes and the reprimands of one of the mahouts!

Now when Amma walks into the yard from the big hall south of the temple building, She is welcomed by Ram, who falls into step with Her as the two head for the foot of Her stairs. There, a brahmachari will be standing with a plate of biscuits and bananas, and Mother will immediately begin to feed Ram. 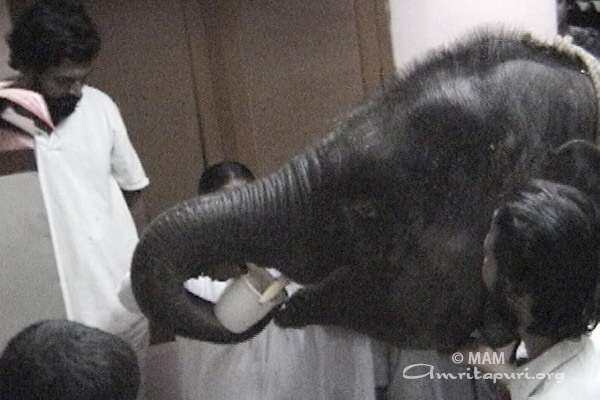 When he first came to live at the ashram, She would offer him a treat by hand, and he would take it deftly with his trunk. But then She would hold some biscuits between Her lips, or behind Her back, and he would still be concentrating on Her Hands. Nowadays, he’s never fooled; he knows all Her different ways of feeding him, and is quick to adjust his attention, following Her every move alertly and successfully.

In the earlier times, his main accomplishment (other than making more and more food materialise somehow in Mother’s Hands even after She would have told him “No more! You go now!”) was that he could prostrate more or less on command: he would bend his front legs and flop his rotund baby body down in front of Mother. Now he has mastered a few other tricks: when commanded to, he will sit-chubby body barely able to balance! Then he can lie down, and roll to one side, flailing his legs in the air, and perhaps trumpeting!

Whatever he does, he has Mother’s fullest attention-that is Her nature: to be utterly present. His antics draw laughter and shrieks and shouts from the people watching; from Mother they attract even deeper attention. She laughs, of course, and jokes, but if you watch Her eyes, you’ll see that She is actually keeping very close tabs on his condition: his health, his growth, and his new acquisitions, be they tricks or tusks (yes, two fine curves of ivory proclaim his growing maturity now).