Mother comes down the spiral steps from the temple, and Ram is standing, facing Her as She walks across the yard. She draws abreast of him, calls out, ‘Ram!’ and stretches Her hand towards his trunk, which is already reaching towards Her. More like a puppy than an elephant, he follows Her to the steps leading up to Her room. There She turns and, taking a few biscuits from a tray held for Her every day by a different lucky person, She holds them out to Ram, who grabs them with his trunk and stuffs them into his mouth. He then immediately stretches out his trunk for more. 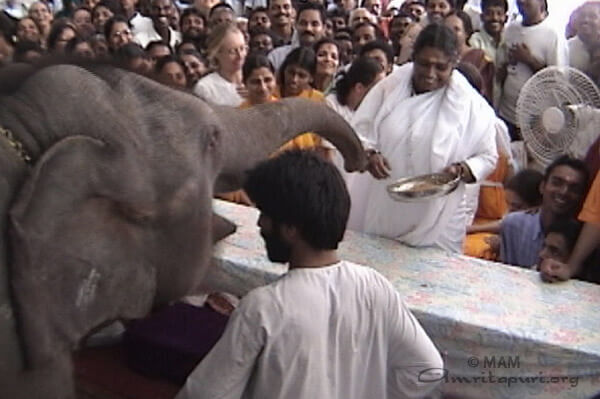 And there is plenty more: biscuits, bananas, sometimes vadas. But Amma is not only the feeding Ram. She is training him, too! For example, She decided it would be fun to feed him biscuits straight from Her own mouth. She held a couple of biscuits between Her lips and waited for him to take them. Despite the fact that he was face-to-face with Her, he didn’t seem to see them! Instead, his trunk went searching for Her hands. She hid them behind Her back. He reached around to find them.

When She showed him that they were empty, he kept pushing his nose into first the left, then the right hand. She took his trunk in Her hands and led it up to the biscuits held between Her lips…Ah! At last! He got them! It took him perhaps three or four days of this guidance, but finally he had learned that biscuits come from three places: two hands and one mouth. Now he readily searches all three alternatives! 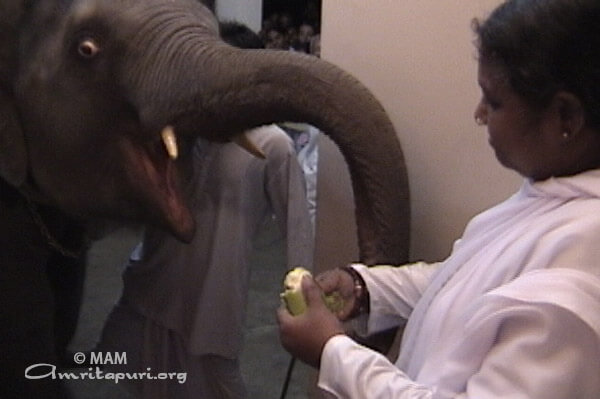 We have all seen how Mother plays with little children at darshan: She takes a toffee and offers it to the child, who then reaches out for it. But She moves it a bit out of reach, so that the child has to stretch a little further. The toffee then moves up, and the child’s hand reaches up…to the left… down… up again. Everyone laughs, and just before the child is too frustrated, Mother relents-often popping the unwrapped sweet straight into the little mouth! Ram is a bit too big for Her lap, but She plays essentially the same game with him, holding out a biscuit, then pulling it back, or to the side. She stretches up on tiptoe, and his trunk reaches up high, only to have Her move the biscuits down and to the side! And then the moment comes when Mother relents: She bends down under the trunk and pops the biscuits straight into his wide open mouth! After the little play session, Mother takes Ram’s trunk in Her hands, raises its tip to Her face and kisses it. ‘Ram, po (go)!’ She says then, dismissing him, and his trainers lead him back to his quarters.