The Clean-Up of River Promenade Père Laval was one of the projects AYUDH Mauritius had committed to at its inception in February 2009. 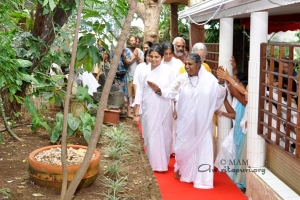 The Municipal Council of Vacoas/Phoenix, keen on AYUDH’s initiative, helpfully provided rakes and baskets as well at a waste truck at the disposal of the Mauritian youths.

Thus properly equipped, the youths jumped into action, collecting heaps of litter which they eventually disposed of at the back of the truck. Given the large amount of littering, one main area was targeted and was thoroughly cleaned.

The once badly littered area is now an inviting space of pristine greenery. Through constructive channeling of their energies, the young AYUDH members have realized the difference that even a few committed people can make through inspired action.

AYUDH Mauritius considers that the momentum is now set for the team to carry on with the project and take further initiatives in view of preventing littering in a location which they are aiming to restore to its natural beauty.