Balagokulam, an organization promoting Hindu cultural education since the 1970s, bestowed its 18th annual Krishna Janmashtami Award upon Amma today. The award was presented by Shripad Yesso Naik, the Honorable Central Minister for Culture and Tourism during a function held at Amritapuri Ashram. 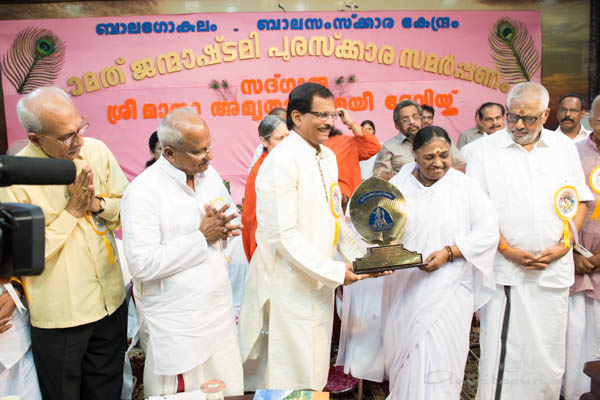 Addressing the gathering, Sri. Naik said, “It is a great honor and privilege for me today to confer the Janmashtami Puraskar to Amma, who is above all awards and puraskaram [honours]. But, still, as an expression of gratitude to Amma, in all humbleness, it is a privilege for the people here that Amma has accepted to be bestowed with this puraskaram only for their satisfaction.” Sri. Naik said that the award was being bestowed upon Amma for her never-ending “promotion of the cultural, spiritual and indigenous heritage of our nation through enlightenment as well as seva [selfless service].”

He then presented Amma with the award.

In her acceptance address, Amma stressed the importance of spreading India’s spiritual culture to its children. “Truth and compassion towards all beings, the twin peaks of human existence, are the hallmarks of Bharata samskara [Indian spiritual culture]. This culture is our mother. If we can imbibe this culture and take pride in it, it will lead us to great heights. If we lose touch with it, our society will become like a kite whose string has snapped.”

The Gita is the essence of the Vedas
Amma then praised the Bhagavad-Gita as one of India’s most precious gems and said that if we really want to bring about a resurgence in spiritual culture that we should try to bring its teachings to the public. “The Gita is the essence of the Vedas,” Amma said. “It reveals the path by which people belonging to all sections of society and walks of life can raise themselves up. Just as the footprints of all animals can fit within the footprint of an elephant, so too the essence of all scriptures is contained within the Gita. The best way to help our spiritual culture grow is by bringing Sri Krishna’s message to the hearts of the people and kindling their devotion.” 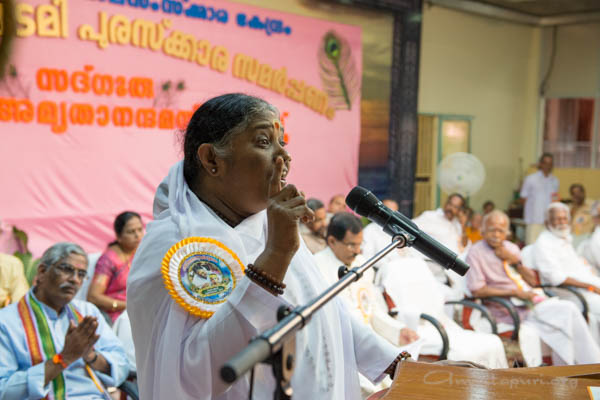 “Does God exist?” is not the relevant question
Amma also pointed out that people should focus on the practical benefits of spirituality instead of engaging in pointless debates: “Does God exist?” is not the relevant question. The relevant question is: “Are human beings suffering?” The practical science for removing suffering is devotion. Devotion not only helps us to unburden our heart but also helps us become more aware of dharma. It also helps us to become more compassionate towards suffering people. Devotion for the Lord and compassion for the world are two sides of the same coin.”

Amma also had a few concrete suggestions, including requesting mothers to spend time in prayer with their children during sunset. “Amma would also ask the mothers in each house to spend at least 10 minutes to a half an hour sitting with their children chanting prayers and singing bhajans every night,” she said. “This will give the children the kind of relaxation and concentration they require. Remember, the mother is the first guru; no one can give a child what its mother can. Some may say that there is no time for such things. But when a mother’s child falls sick and has to be hospitalized, won’t she spend days—even months—at the child’s side? It is important that we bring back the culture of the evening prayer.”

At the end of her address Amma said that she was accepting the award on behalf of all her devotees. “A mother never expects any award for the things she does for her children,” Amma said. “For the happiness of my children, in the name of all of my children, Amma is accepting this award. May the efforts of Balagokulam help transform every heart into a gokulam in which little Krishna will joyfully reside forever.”