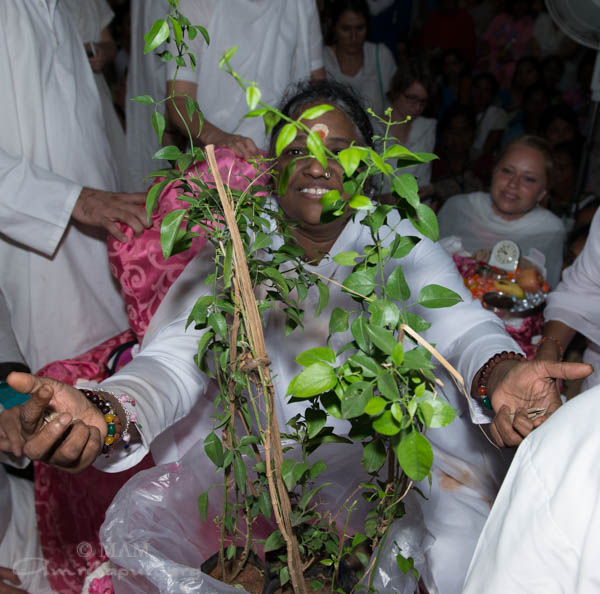 This past week more than 70 tribals and villagers from remote areas — all living below the poverty line — came to Amritapuri Ashram for Amma’s darshan. Inspired by Amma’s efforts to uplift the remote village populations throughout India, devotees and ashram residents helped to bring the villagers here to meet Amma.

Feeling compassion at the sight of their innocence and deep economic plight, Amma offered 20 of them — who had come from Eastern Kerala — employment at Amrita Hospital in Cochin. There, they will receive free room-and-board as well as salaries for assisting in offices, delivering meals to patients and serving as orderlies. Amma also offered to sponsor the higher education of one girl who, having recently completed her 12th standard studies, was amongst the highest educated in her village.

Many of the villagers had never left their panchayats (villages) before, not even to go to nearby cities. Having never interacted with the world outside their village, the tribals from Dummiragunda Mandalam (Visakhapattinam District, Seema Andhra) even had to be shown how to dress in a manner suitable for modern society.
They also had to be taught how to use showers and toilets at the ashram, as they had no previous experience with such amenities. In fact, because their village’s nearest source of clean water is three kilometers away, they were not even used to regularly bathing. 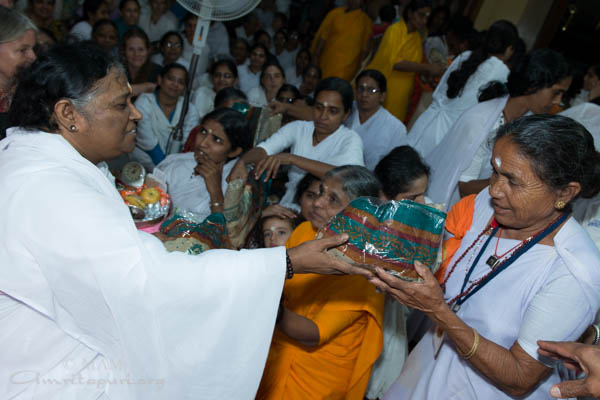 Much of the poverty and lack of resources in villages like these stems from their remoteness. With schools providing education beyond 7th standard being as many as 50 kilometers away via forest roads, few are able to attend.

When a husband and wife from Kallar (near Adimudi in Idukki District, Kerala) came for Amma’s darshan, the husband complained to Amma that his wife was so obsessed with cleanliness that she forced all their guests to take a bath before entering their dwelling, and she would spend hours in the bathroom washing her hands. He told Amma that he thought she was arrogant and he had begun twisting her arm to try to stop her behavior. Amma explained to the man that the woman must be suffering from an obsessive-compulsive disorder. Amma then arranged for the woman to see a psychiatrist at Amrita Hospital and get the care she needed to treat the disorder.

This past June, devotees had already arranged a medical camp in Badimela (Visakhapattinam District, Seema Andhra), with doctors providing totally free checkups and medicine there for more than 500 people. On August 27th, a similar camp will be held with doctors from Amrita Hospital in Kattamudikad (near Munnar, Idukki District), the home of another group of villagers who happily visited Amma this week.

“Even though many of them lack education and are not civilized by our standards, they have the culture of spirituality within,” Amma said, as she watched the group from Badimela offering a tribal dance during darshan. Afterwards, Amma lovingly embraced every one of them and personally handed each woman a brand-new sari and each man a brand-new shirt. The organizer of the villagers’ trip presented Amma with indigenous seeds and plants from the tribal regions.

More such villagers from Mankulam Puram (near Munnar) will arrive tomorrow.