Swami Ramakrishnananda Puri, one of Amma’s senior-most disciples, visited three countries in South America in late September 2001. Programmes were held in Argentina, Brazil and Colombia. All programmes were well attended by large numbers of people eager to hear about Amma and fervently praying the Divine Mother Herself will one day visit in person.

Swamiji’s programme in Buenos Aires, Argentina included a special appearance by the Indian Ambassador, Mr. Nigam Prakash, who opened the programme with a warm welcome address. The crowds were highly enthusiastic about Swamiji’s satsangs and bhajans.

Next Swamiji went to Araruama, outside the city of Rio de Janeiro, to inaugurate the Amriteswari Prayer Hall with a special puja. Earlier Amma had blessed a sculpture of Shiva and Ganesha and Swamiji placed the sacred image in the Hall and performed a traditional worship. The Hall was overflowing as the Brazilian devotees gratefully accepted the blessing of Swamiji’s presence in the beautiful new facility dedicated to Amma.

In Colombia, “El Tiempo,” Bogota’s leading newspaper, published an announcement of Swamiji’s programme there. Over 500 hundred interested people attended the Devi Puja held on Saturday, September 29th. “Om Parashaktyai Namaha” resounded as the devotees participated in the Puja with all their hearts. Afterwards Swamiji distributed prasad to all and answered numerous
questions. All present were deeply inspired by the programme held in Amma’s name. 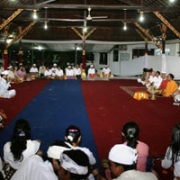 Is it really tapas? First Kidney transplant at Amrita hosptial
Scroll to top