As you may know, Amma spends more than half of every year travelling across the globe, that all of Her children might see Her at least once a year. She has been everywhere from Reunion Island to Russia, from Singapore to Santa Fe, and of course to cities and villages big and small across the length and breadth of the country of Her birth: India.

But of all these locales, one stands out: Kozhikode, a small city (by Indian standards) in Amma’s native state of Kerala. 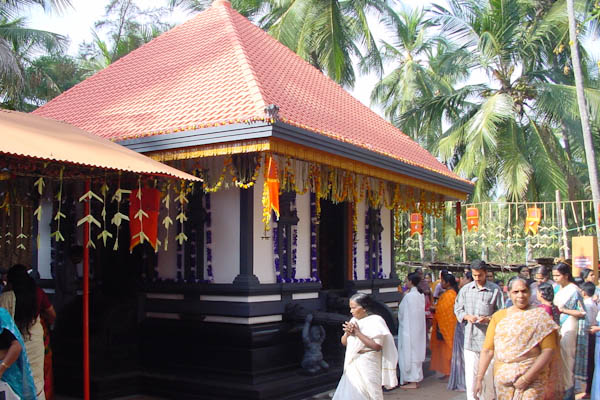 This year, Amma’s programs at Kozhikode stretched from the 19th to the 22nd of December. The ashram there is home to one of the earliest of Amma’s Brahmasthanam temples, so the programs there followed an impressive if by now standard daily schedule: five archanas per day, Amma’s satsang, bhajans, and hours of Darshan both morning and night; and the Mars, Rahu, and Saturn pujas stretched over the final two days.

And as always in Kozhikode, from the very first morning of programs, even from the night before in anticipation of Amma’s arrival, the crowds overflowed from the Darshan hall, winding back and forth in long snaking queues through the labyrinth of perpendicular wooden posts necessary to keep the crowds organized. Which is not to say that they are a rowdy bunch—far from it, in fact, more than numbers of devotees, Kozhikode is known for the devotion which is so apparent in all the waiting faces, in al the hands eager to serve.

Even at the peak of the programs there, with more than ten thousand devotees waiting, from the earliest rays of dawn, under the hot sun as it travelled from one end of the sky to the other and on into the night, the overall mood of the crowd was one of patience, forbearance, surrender and devotion.

Even at two in the morning, families could be seen lining up as far as two kilometers away as the crowd spilled out of the ashram grounds and onto the main road; and these not waiting for Darshan that night, but for the day to come. And yet: person by person, family by family, from the tail end of the queue to those who had only minutes remaining to their Darshan—which would, in most cases, last not more than two seconds—peace could be seen on nearly every face.

Fascinated by this phenomenon, this writer, one of Amma’s Western children, set out to discover how so many thousands of people could be so patient for so long. I was assisted in translation by students of Amma’s Amrita Vidyalayam primary school which adjoins the ashram. We approached devotees at random, moving from the school to the kitchen where volunteers were chopping vegetables, to the tables where devotees enthusiastically sold Matruvani (the ashram’s monthly periodical) to the people waiting in the Darshan queue. My young aides were unfailingly resourceful, patient, and careful in helping me to meet and interview these devotees, and discover the secret of their unique patience and overwhelming devotion.

From the very first, and over and over again, we were given a single answer: faith, unshakable, undying faith in Amma as Guru, and in most cases, as God Herself.
Trying another angle, we tried to present another question: What gives you faith? At this, we were often met with an odd look; a better question might have been: What could possibly shake your faith?

Finally, we asked how these devotees’ lives had been changed after taking refuge in Amma. I had foolishly thought that I would have a hard time getting people to talk, and that I might have to really fish for answers, but the opposite was true: once started, it was difficult to gracefully end any conversation. One anecdote would immediately be followed by the question: Do you want to hear another? How could I explain that this was only meant to be a short article? And as I had from the beginning, I again felt remarkably unqualified to be interviewing these exceptional devotees.

I felt as if I had been transported in space and time, to a place called Vrindavan, the home of Krishna’s Gopis. And I was reminded of a story from the Srimad Bhagavatam, which relates the life of Sri Krishna. It seems that once upon a time a messenger came to Vrindavan, seeking to deliver a message to Sri Krishna. This messenger approached a number of Gopis who were engaged in their work tending to Vrindavan’s cows. He asked the gopis where Krishna was. At this, the Gopis started laughing uproariously.

Hurt, the messenger begged an explanation. “Excuse me, but I really don’t see what is so funny. I simply asked where I might find Sri Krishna.” At this the gopis laughed even harder, but one among them took pity on the poor fellow and, through her laughter, gasped, “Dear sir, we mean you no offense. It’s just that your question struck us as quite humorous. Sir, you are in Vrindavan. Where then is the place that Sri Krishna is not?”

This is the kind of faith and devotion that can be found, to a person, in Kozhikode. And it is what has made more than one of Amma’s children begin to think of it as Amma’s Vrindavan.

Amma Herself said that many of Her children there had come only to serve. When the water ran dry, as often happens during Her programs in Kozhikode, these devotees repeatedly cleaned out the toilets by hand. They did not have time to sit for the archanas, or hear Amma giving satsang or singing bhajans, let alone receive Her Darshan. Going without food or rest, these children worked tirelessly to make the tens of thousands of other children feel at home while waiting for their turn to meet their Amma. Amma said that with each breath, those children had only one thought: “Amma, Amma, Amma…” Amma invited each of these true sevaks onto the stage, where each one got a chance to give Her the prasad to give to the devotees who came for Darshan. These shifts, lasting two minutes each—sixty times the length of the average Darshan in Kozhikode—must have been sheer bliss for those hard-working devotees.

Interviews with devotees at the program

* Ramakrishnan, married with one child:
Q: How long have you been waiting in this queue? How much longer will you have to wait?
A: “I arrived here at six a.m. If I have to wait till dawn tomorrow, it’s no problem. And if I don’t get Darshan here, I’ll go to Mananthavady [Amma will hold programs there in January 2002].
“I want only Amma, nothing else… We didn’t have a child. I asked Amma, and She told me to come with my wife. [When we came together] Amma said, ‘You will have a daughter.’ Now, we have a daughter. She is one year and three months old.

…Before meeting Amma, we didn’t believe in Her. But after meeting Her, we are always meditating on Her. We have peace of mind. We don’t even want to go home. We want to be here [at Amma’s ashram] always.
“Let Amma give peace to everyone in the world.”

* Jody (waiting in the queue with her husband’s parents, her sister-in-law, her brother, and her brother’s wife. It was not uncommon to see entire families waiting together like this.)
– I’m seeing Amma for the second time. I feel Amma is God. I’ve read Amma’s books, and after coming to see Her, I made Her my God. Amma knows everything. Now I pray to Amma whenever I have any difficulty, and I feel the difficulty goes away.

Q: Don’t you feel tired, waiting in the queue for so many hours? [It was already after midnight.]
A: While waiting in the queue, I am able to watch Amma on the TV [monitors stationed throughout the queues and elsewhere, showing Amma giving Darshan live on stage] so I don’t feel tired, though I have been waiting for five or six hours and may have to wait many more.

* Chakia works as a sweeper for Amrita Vidyalayam. When we spoke with her, she was cleaning a hut where mothers with young children were resting: “Amma is always with me. When my husband died, Amma was there to help me.”
Q: Will you go for Darshan?
A: Even if I don’t go for Darshan, it’s no problem. I always feel satisfied. Once when I went to Vallickavu [Amritapuri], I wasn’t able to get Amma’s Darshan. But Amma sent prasad to Calicut for me, and others who didn’t get Darshan.
When I sleep, when I take a bath, when I eat, at every moment I hear Amma’s name in my ears.

* Vasanta is married, with two teenage children. “When I met Amma for the first time, she told me, ‘Don’t be sad, daughter, everything will be all right.’ Amma is God, whom we can see. We can’t see the other gods, but we can see Amma.”

After meeting Amma, Vasanta began coming to the ashram to chant archana. Then she started coming for seva, chopping vegetables, helping to clean the entire ashram before Amma’s arrival. Throughout Amma’s programs she was busily engaged in chopping vegetables. She was happy to be able to listen to Amma’s satsang and bhajans broadcasted through loudspeakers as she worked.