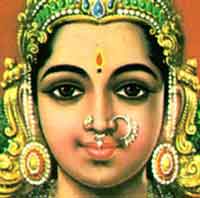 Ordinarily, we face our experiences in three ways. We try to run away from situations, we try to change the situations believing that our problems will be solved in that way, or we bear the circumstances while cursing our lot.

Running away from a situation will not help us to avoid our problems because, if we do, the difficulties are likely to come back to us with double intensity.

Amma remembers a story. A young man had an uncle who was in the military. One day he received a message that his uncle was on his way to visit him at his house. This was not good news to him because his uncle was a non-stop talker. The old man was in the habit of relating endless stories about his adventures in the military, and he had a lot of stories to tell.

The nephew decided to leave his house without delay in order to avoid the old man. He thought, “Why should I have to waste all that time listening to his meaningless stories?” So he left through the back door and began walking in the opposite direction from where he thought his uncle would be coming. But as he was walking down the road, he suddenly saw his uncle coming straight towards him! As soon as the uncle saw him, he pinned him down right there on the road and began to unravel his stories. He went on and on as his nephew stood there helplessly. After what seemed like ages, the nephew thought to himself, “I’m so thirsty but there’s no shop here. Had I stayed at home, at least I would have had some water to drink. And it’s so hot out here! There isn’t a single tree where I could find some shade. My legs are also in a lot of pain, and there isn’t a bench where one can sit down.”

From the nephew’s experience we can see that running away from a situation doesn’t help; on the contrary, the problem is likely to get worse.

The second way is to try to alter the circumstances. For example, you are at home and you are feeling very restless. You are convinced that there’s something wrong with your home and that this is the reason why you’re feeling so unsatisfied. You consider moving to a different house in a different area, or you think of demolishing your house and building a new one. Perhaps you also decide to buy a new TV and a few other amenities, believing that this will solve your problem. Your also think of installing an air-conditioner. But none of this is going to solve your problems.

There are a lot of people who are unable to sleep even though they have air-conditioned bedrooms. They have to take sleeping pills to get even a wink of sleep. What we really need to do is to “air-condition” the mind, because all our problems exist in the mind. Spirituality is the discipline of “air-conditioning” the mind.

A husband and wife were always quarrelling. Finally they decided they couldn’t live together any longer, and they were divorced. Soon thereafter both of them remarried. However, it didn’t take long for them to realise that their new marriage partner was the same old person in a slightly different form. This happened because their minds hadn’t changed. It is the mind that needs to be transformed. We cannot free ourselves from our problems by merely changing the outer situation.

The third way is to curse our situation. There was a youth who had a stomach-ache. He kept telling everyone about his suffering. “Mom, Dad, I have a terrible stomach ache. Brother, sister, see, I have a pain in my stomach! I can’t bear it!” Finally, everyone around him also got a stomach-ache. In this way people transmit their problems to all those around them. But it doesn’t help them to solve their problems in any way.

There is a fourth way to face the situations in life, and that is to change one’s mental attitude. This is the only way to really enjoy life. It isn’t always possible to change the circumstances according to our needs. What is required is that we learn to condition our mind according to the demands of any given situation. This positive attitude is developed by practising spirituality in our lives.

What did Lord Krishna teach Arjuna? The Lord didn’t change the circumstances surrounding Arjuna. Instead he taught Arjuna to change his own frame of mind. The Lord could have destroyed the Kauravas by means of a storm or in some other way. He could have defeated the Kauravas by himself, and could have given everything back to the Pandavas. He had the power to do this. But He didn’t change the outer situation. Instead he changed Arjuna’s attitude towards the world. He taught him the nature of life and how to confront it.
Even in our prayers we all have those attitudes. King Janaka, Sita’s father, had arranged a contest for all the kings who wished to win Sita’s hand in marriage. The one who could string the mighty bow of Lord Shiva, which was kept in the palace, would be allowed to marry her.

Lord Rama was walking towards the dais to try his turn at stringing Shiva’s bow. When the citizens of Mithila beheld his exquisite form, they prayed, “See how strong and beautiful he is! God, give him the strength to string the bow.” But when the kings who were taking part in the contest saw Rama, they all resented him being there, and they prayed, “O God, why did you let him come here? With him here, I don’t have a chance in this contest.” In this way they were cursing the situation.

At that moment, Sita saw Rama and was captivated by his beauty. She prayed, “O God, why did you make that bow so heavy? Please reduce its weight!” Thus she was praying for God to change the circumstances.

Among these different prayers, only the citizens of Mithila had the right attitude and prayed in the right way. They didn’t pray for the situation to change, but only that Sri Rama would have the strength to confront the situation, as it was, and that he would emerge successful. Similarly, we should pray to be given the mental strength to boldly face the situation.

The best way to pray, however, is to pray for the peace and well-being of the whole world. It is this type of mind that we should cultivate.

Our prayers shouldn’t be childish. For example, a little boy goes to a temple and prays, “O God, please make China the capital of America!” A person standing nearby happens to overhear the child’s prayer and asks him, “My boy, why are you saying such a strange thing?” The boy replies, “Well, you see, in the exam I wrote yesterday, I wrote that China is the capital of America. I realise, now, that I made a mistake. So I’m praying like this because if God makes China the capital of America, my answer will be right!” This is mere childishness. Such childishness shows a lack of discrimination, and is a sign of immaturity. Instead of childishness, we should develop the innocent heart of a child, which is something quite different.

If a swimming teacher always stays close to his student, trying to hold him up without allowing him to swim on his own, the student will take a very long time to learn how to swim. The student should be allowed to strive by himself and acquire the necessary skills. Similarly, we have to acquire the strength we need to overcome the situations in life. Only by having the proper mental attitude is this possible.

We shouldn’t waste our lives resenting the situations we find ourselves in or feeling despondent because we fail to change them. By choosing to have the proper attitude, we will be able to face every situation with a smiling face. Instead of depending on others, we should cultivate faith in ourselves. This is the way to find peace. So instead of cursing the situation, we should try to change our mental attitude. Let us pray for this.