If someone loses his temper, you should think of it as his samskara (the totality of impressions and deep-rooted tendencies that we have acquired during countless lives). Then you will be able to forgive him — you will have the strength to forgive. 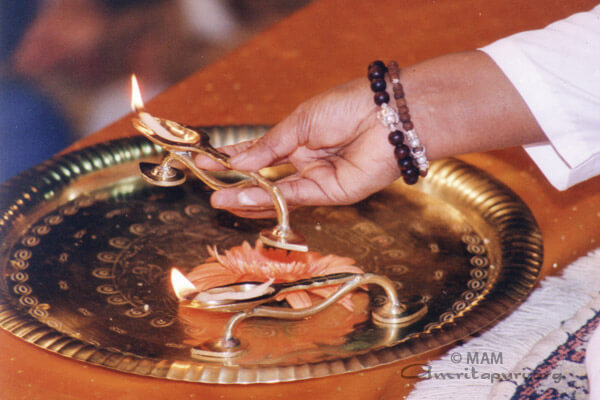 Our attitude of forgiveness will make our thoughts, words and actions good. Our good deeds will bring us God’s grace. Just as good deeds are followed by good results, bad actions are followed by bad results. Our bad actions are the cause of suffering. So we should always take care that and do only good; then God’s grace will flow towards us. And having received that grace, we will have no reason to complain that life is sorrowful.

Life is like the pendulum of a clock, constantly moving back and forth in opposite directions, from sorrow to happiness, and back again. To be able to accept both joy and sorrow, and to move forward, you need to understand spirituality. Then you will be able to overcome the swinging back and forth from happiness to sorrow; you will understand the nature of everything and move ahead on the path. If you know that firecrackers are about to go off, you won’t be startled when they suddenly explode. In the same way, if you understand the nature of the world, you won’t go to pieces over mere trifles.

In every evil person there is an inherent possibility of becoming good. There is no human being who doesn’t posses at least one divine quality. If we can forgive the mistakes of others, the divinity in them will be awakened. So we should try to cultivate this attitude. When we perceive the good in everything, we are filled with God’s grace. That grace is the source of all success in life.

If we all turn our backs on a person, thinking only of the bad that he has done, what future does he have? On the other hand, if we perceive the little good in him that is still there and allow him to cultivate that quality, he will be uplifted, and this may have such an effect on him that he may even become a great person. Sri Rama was willing to prostrate before Queen Kaikeyi, who was responsible for his banishment to the forest; Christ washed the feet of Judas who betrayed him; and the Prophet Muhammad readily looked after the atheist woman who once had poured refuse on him. Such are the example shown to us by the great souls. The easiest way to attain constant peace and happiness in our lives is to follow the path which they have shown us.

There was once a Guru who wanted to move to a village. He sent two of his disciples to that village to inquire about the nature of the people living there. One of the disciples visited the place and returned. He told his master that all the people in that village were the most wicked people imaginable. They were robbers, killers and prostitutes. Nowhere else could you find such evil souls, he said. When the second disciple returned, he said to the Guru, “The people in that village are very good. Never before have I met such good people. ” The Guru wondered how the two disciples could have such contrasting opinions about the same village. When he asked them to explain, the first disciple said, “In the first house I entered, I was greeted by a murderer; in the second house lived a robber, and in the third house I saw a prostitute. I felt so discouraged that I didn’t bother to go any further; I turned around and came back. How can I say anything good about a village where such bad people are residing?”

The Guru then asked the second disciple to describe what he had seen. The disciple said; “I went to the same houses as he did. At the first house I saw a murderer. When I arrived at the place, he was outside taking care of a poor man who was lying on the road. It struck me that even though he was a murderer, he still had some compassion in him; his heart was not entirely dry. And when I saw this, I felt so much love for him. A robber was living in the second house I came to. When I reached that place, he was busy feeding the poor. He was in the habit of calling all the starving people in the village. He would find out who didn’t have enough food and he would feed them. When I saw this good quality in him, I was filled with joy. I then went to the third house, which belonged to a prostitute. There were three children in the house. When I asked about them, I was told that they were all orphans and that the prostitute had taken them under her wing and was raising them. So when I discovered that there were such good qualities even in those who are considered to be the worst people in the village, I couldn’t even imagine how much more noble the other villagers must be! By visiting those three houses I was given a great impression of the people of that village.”

So, My children, light the lamp of love within you and move forward. When we take each step with good thoughts and a smiling face, all the goodness will come to us and fill our being. Then God cannot possibly stay away from us. He will embrace us. There won’t be a moment in our life without peace and happiness.