Blog - Latest News
You are here: Home / Around Amma 2012 / Brick-moving with Amma is heart-moving

Not long ago, I was telling a newcomer to the ashram how it used to be ‘in the old days‘:
“Amma used to come out at night and help with whatever work there was to be done–carrying bags of sand from the beach to fill in a swampy area, or lifting slabs and chunks of broken concrete to clear a space for new construction, or sorting through garbage that had piled up “out of sight” behind huts (not out of sight of the One Who Sees All, though!).

But she doesn’t any more. With all the institutions to oversee, and the growing crowds to give darshan to, there’s no time. And besides, with all the people here, it would be such a hectic scene!”

The newcomer said, “Oh, you’re so lucky–I wish I could have experienced Amma that way!” 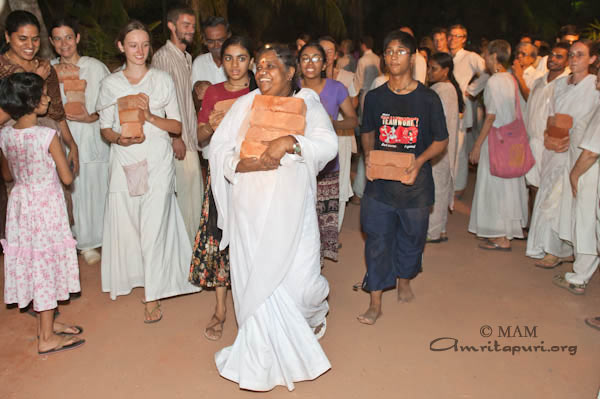 On Friday night, just as dinner was ending, the bell rang three times–what? But Amma has already gone to her room! What’s this? Another archana? (Lots of extra archanas here lately, for the benefit of Nature and World Peace).

But no—everyone rushing in the direction of the beach, but stopping short of there. A huge load of bricks had been delivered in the area where new accommodations are being built, and Amma wanted these bricks moved closer to where they were needed.

Or was it just that she wanted exercise, for herself, for all of us?

For quite some time, Amma has been telling us all that we need to take better care of our bodies. Get some exercise. Do yoga. Don’t just sit!

Well, whether the goal was getting the bricks into place, or giving us all some exercise, it was achieved. In about 40 minutes, the mountain of bricks had been moved, carried in stacks from two to maybe six or eight, depending on the strength of the individual ‘porter’. No forklifts, no wheelbarrows–just like the old days: each one doing what she or he could, and there was something to do for anyone who showed up!

Of course, the most popular thing to do was to watch Amma–whose clasping of bricks to her chest was reminiscent of her holding one of us in her darshan embrace–but she was adamant: “No Looking!” she called out a few times–as if people could resist looking when the all-attractive one was passing by with her load of bricks! The way to get a look was to participate in the work, so hundreds of people were suddenly brick-carriers. Just like Amma, they would go to the original stack, hold out their arms, someone there would load them to the limit they indicated, and then they’d turn away and carry their loads to the destination, where someone else would accept and stack the delivery.

Those who are concerned about “Amma’s body” were anxious. Amma would say. “Not heavy. No problem.” 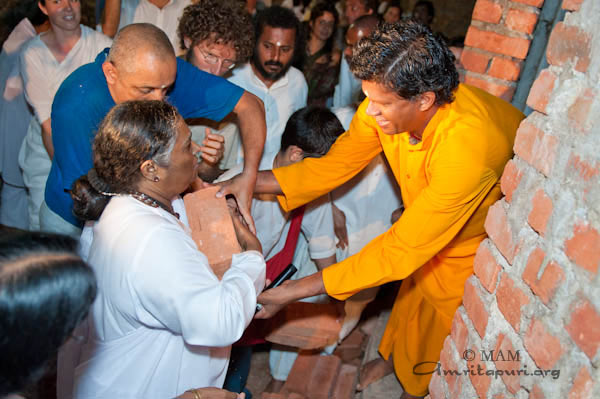 Back and forth she marched, with someone holding a light for her path, someone else calling out “Move, move! Amma’s coming!” For somehow, the various routes from the starting pile to the destinations were clear and easy, one line headed one way, the other another way–but Amma’s route always got crowded with all who couldn’t make themselves obey the “Don’t look!” injunction, and with people who’d just arrived, and didn’t know what was going on, and on suddenly seeing Amma would be startled, and gape. Amma would laugh, enjoying their surprise as much as they did!

Yes, the bricks needed to be moved, and she wanted exercise, but Amma always does more than one thing at a time: so every few minutes her route would change—not just because the old one had become too cramped with onlookers, but in order to give a gift to those who were working on a different route–suddenly, they who’d stayed away and ‘on task’ found in their midst Amma! So along with the stated goals of brick-moving and body-moving, there was the other one Amma’s always engaged in: heart-moving.

When the job was done and no more bricks remained to be moved, after handing over her last load, Amma kept on walking to her room. Finished? Not at all–still more joy to be offered: she sang a few lines, and danced along, elbows pointed, body moving in time, face bright with playful joy.

Up the steps to her room now–she turns, says “Hard to know whether there were more people or more bricks!”, and goes to her room.

She comes to her window, and starts pushing bags of treats out the window–banana chips, crisps and more–, letting them fall to the eager hands below, where they are torn open and the contents handed around to all her children.

“Children share amongst yourselves!” heard Amma’s voice was heard clearly despite the din. 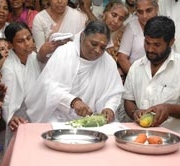 As the clock struck midnight 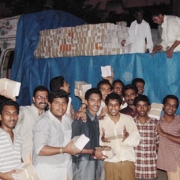 Is it really tapas?

She did what She always does

Muhammad Yunus: I am humbled by these accomplishments Japanese touch to Raichur houses
Scroll to top